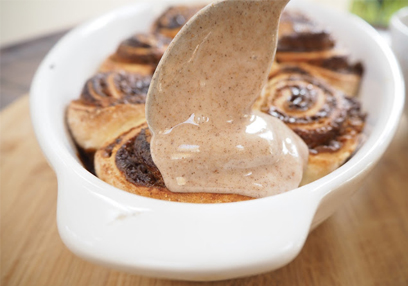 When it comes to seasonal bakes, you can't get much more autumnal than a cinnamon roll. These sweet, doughy and spicy treats are like one big mouthful of cosy, autumn joy. And, as I always think you can never have too much cinnamon, my cinnamon roll recipe comes lathered with the most autumnal flavour you can find, a cinnamon-y, ginger-y pumpkin spice frosting that tastes oh - so - good. My easy cinnamon roll recipe is oil free and until you add the optional (but seriously tasty) frosting, it's also refined sugar free, so you can enjoy all the cinnamon rolls your heart desires (which, in my case is a lot).

1. Start by pre-heating your oven to 175 degrees Celsius, then place your almond milk in a pan along with 2 tablespoons of cashew butter. Gently heat the milk and cashew butter until the cashew butter is melted. Then remove from the heat and allow to cool until lukewarm.

2. As the milk cools, sieve your flour into a bowl along with your yeast sachet and in a separate bowl, combine your coconut sugar, cinnamon, ginger and nutmeg then place to one side.

3. Combine the warm milk with the flour and stir well to form a dough. Knead the dough on a floured surface to form a smooth ball, then place in a floured bowl and cover to allow to rise for around 1 hour.

4. When the dough has proved for 1 hour and has roughly doubled in size, turn out onto a floured surface and roll out into a large rectangle. Spread your remaining cashew butter evenly on the dough then sprinkle your cinnamon sugar on top, finally, drizzle with 2 tablespoons of maple syrup and roll length ways tightly into a sausage shape.

5. Trim the uneven ends from your roll and slice the remaining roll into 12 equal pieces. Place the pieces into an oven proof dish and place in the oven for around 20 minutes.

6. Whilst the cinnamon rolls bake, combine your icing sugar with the cinnamon, ginger and nutmeg then stir in the almond milk to form a thick frosting.

7.Once baked, allow the cinnamon rolls to cool slightly before frosting and once cool, lather generously with pumpkin spice frosting.

Now all that's left to do is pop the kettle on, curl up with your favourite festive candle burning, a good TV show on and dig in to a sweet, doughy taste of autumn.

I hope you give these delicious pumpking spice cinnamon rolls a try! And if you do, be sure to tag the picture #AvogelRecipes on Instagram so we can see it :) 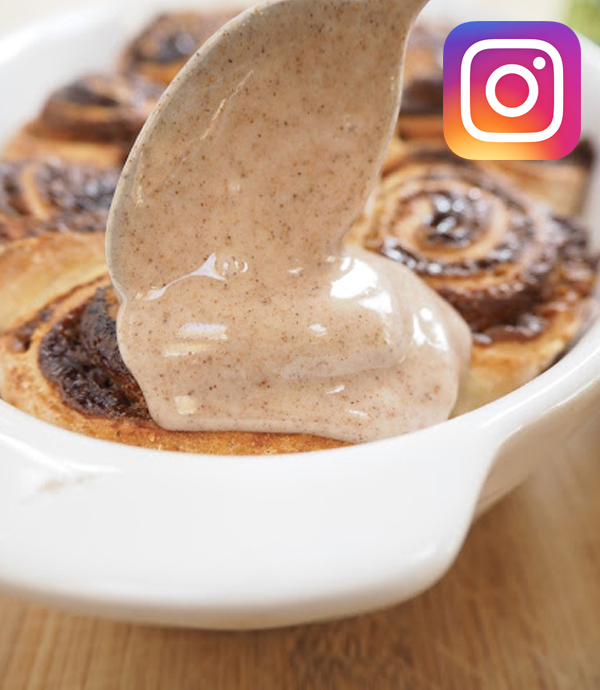 This recipe is full of goodness

Almond milk is an excellent substitute for dairy milk. It contains no lactose or cholesterol but is full of essential nutrients, including folate and vitamin C.

Ciara is an avid food and fitness blogger who loves to share fitness tips, cruelty-free lifestyle advice and an abundance of delicious and easy-to-make plant-based recipes on her blog Ciara's Corner. Since going vegan a few years ago, food has become her biggest passion in life.

Get your free eBook