Fibromyalgia can often be difficult to diagnose because there is no known cause. It is more likely to occur in women and it  is believed to be associated with abnormalities in the nerves. Fibromyalgia can trigger an array of symptoms, including fatigue, memory loss and digestive problems. Here at A.Vogel Talks Fibromyalgia, our muscles & joints advisor Earle Logan discusses the symptoms of fibromyalgia and how they can be reduced by simple lifestyle changes and self-help techniques. If you've got any extra questions, you can use our Q&A service to ask Earle.

An introduction to Fibromyalgia

Fibromyalgia is medical condition of unknown cause. It gives rise to many symptoms and can affect a number of parts of the body.

Recent research has indicated that an excess of sensory nerve fibres in the hands of people with fibromyalgia may be a reason for both the cold hands experienced by fibromyalgia sufferers, and the extreme sensitivity to pain.

A number of factors are said to give rise to this situation, including physical or mental trauma, viral infections, disorders of immune system function, stress and anxiety.

Most people suffering from fibromyalgia complain of pain and tenderness in muscles and associated soft tissues. The common muscle groups affected are in the neck and shoulders, but fibromyalgia can give rise to pain in practically any muscle of the body.

Other symptoms include unexplained tiredness or fatigue, intolerance to exercise, poor concentration and memory.

Estimates suggest that up to 4% of the population may suffer from fibromyalgia and the condition is more commonly found in those between the ages of 20 and 50. 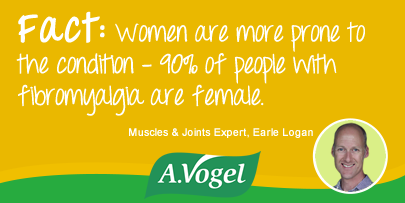 Interesting fact? Share it with your friends using the social media buttons below:

Women are more prone to the condition – 90% of people with fibromyalgia are female. Those who worry more, or are more anxious, and people suffering from stress at home or work are also more likely to get the condition.

There is a suggestion that fibromyalgia can run in families and have a genetic component although it is clear that other external factors are also involved.

How is fibromyalgia diagnosed?

It is unfortunately the case that not all members of the medical profession fully understand fibromyalgia. Nevertheless, if you think you have the condition, it is important that you seek your doctor’s advice in the first instance – if nothing else, to exclude the possibility of other health problems.

There is no single test which will help make the diagnosis of fibromyalgia. Symptoms may mimic other health issues and your doctor may want to do blood tests to eliminate the possibility of conditions.

The American College of Rheumatology has developed a system where doctors look for abnormal tenderness or muscle pain in those suspected of suffering from fibromyalgia.

It is not known what causes fibromyalgia and as there is no clear underlying cause to target, treatment of fibromyalgia tends to be focused on the relief of pain and other forms of symptom management.

Conventional treatments of fibromyalgia include:

However, many consider that fibromyalgia is a condition which is best treated with an integrative or complementary approach, using both orthodox and alternative therapies:

"I have Fibromyalgia and was recommended to try Devils Claw. This product seems to be working very well for me."

Around 70% of the symptoms associated with these two debilitating conditions are shared, so how do you tell your doctor which one he should investigate?

Looking for a solution to to help relieve symptoms such as muscle and joint pain, backache, rheumatic pain and lumbago?

“I have used these for several years and would not wish to be without them.”

To find local independent stores in your area that sell Atrosan Devil’s Claw tablets, simply type your postcode below.

Fibromyalgia is really a syndrome, meaning it has a lot of symptoms rather than one synonymous with ...
Read more >

What are the symptoms of Fibromyalgia? Can my doctor do a test?

There is no blood test available, so doctors rely on locating pain points on the body. Fibromyalgia ...
Read more >

What is the worst Fibromyalgia can become?

While we try to encourage people to engage in activity, as it can reduce muscular pain, I'd say the ...
Read more >

Osteoporosis
What is the best natural treatment for osteoporosis?

Just how healthy are your muscles and joints?

Answer our questions and find out if your flexibility is compromised.

Find out how flexible you are

As the A. Vogel Muscles and Joints advisor, I recommend Atrogel® for the effective relief from aches and pains.

Women are more prone to fibromyalia than men! It is estimated that 90% of those with the condition are female.