Why do we cough? Read about the different types of cough, causes and remedies

Coughing is one of the body’s most basic defence mechanisms. We cough to expel foreign particles such as from our respiratory system, which can help to clear bacteria and viruses out of the system. Here at A.Vogel Talks Coughs, our immune system expert Dr. Jen Tan examines the various types of coughing, describes their causes and recommends suitable herbal and home remedies to ease any discomfort or pain. If you have a question, you can use our Q&A service to ask Dr. Tan directly.

A cough is the sudden expulsion of air from the passages of the respiratory tract. It serves the purpose of clearing our airways of mucus, bugs and foreign particles.

Coughs are something we are familiar with. We have all used this mechanism without thinking, for instance, to clear a bit of mucus at the back of our throats before speaking.

However, sometimes coughs are not controllable and come in spasms. Usually, these are caused by viral infections such as colds or flu giving rise to inflammation, triggering the cough reflex.

While you may be bringing up a lot of mucus when you cough, the person next to you might be experiencing a dry or tickly cough. This is because coughs can be described in a number of different ways:

Coughing is one of the body’s protective mechanisms. It serves the purpose of keeping our respiratory system clear.

The lining of our respiratory tract, from the back of our throat to the depths of our lungs, is richly supplied by nerve endings. When these are irritated, nerve signals pass to the cough centre of the brain, triggering a series of coordinated muscular actions leading to a cough. This is known as the cough reflex.

The larynx (commonly known as the voice-box) is closed momentarily by the epiglottis. This is followed, almost simultaneously, by the contraction of muscles in the abdomen and chest, which builds up pressure within the upper airways.

When the epiglottis relaxes again, the larynx opens and a short burst of approximately 1.5 litres of air from our lungs is released through the upper airways giving rise to the characteristic coughing sound.

This blast of air has been measured at speeds of up to 50mph, pushing unwanted material out of the upper airways and also releasing up to 3,000 tiny droplets of saliva.

Coughs can be caused by a wide variety of factors:

The remedy that will cure your cough will depend on the type of cough and its cause. Cough remedies can be divided into two main categories:

Both expectorants and anti-tussives are available as conventional medicines prescribed by your doctor or from your pharmacy, as well as licensed herbal remedies available from health food stores and pharmacies.

Find out about other types of cough remedies available.

When should I go to the doctor?

Most coughs, particularly those associated with colds and flu, disappear quickly. However, coughs can also be caused by other conditions, some of which may require medical attention. You should seek advice if you:

Where to buy Bronchosan locally 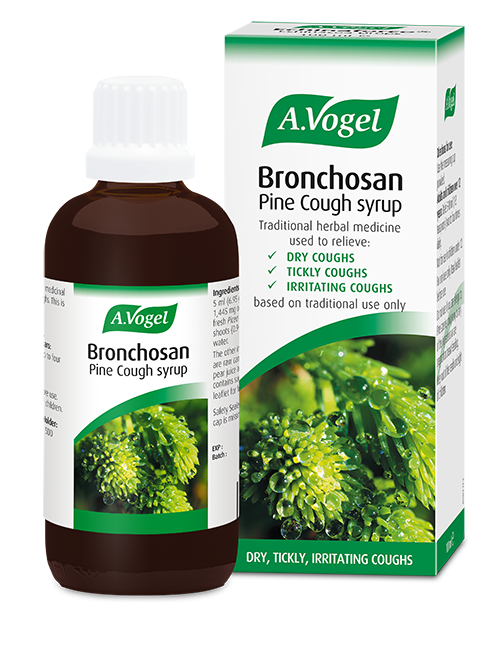 If you are suffering from a dry, tickly or irritating cough then look no further than Bronchosan.

This is made with extracts of freshly harvested pine shoots, as well as a touch of honey. Together these ingredients have a pleasat taste and help to ease irritation.

To find local independent stores in your area that sell Bronchosan, simply type your postcode below.

Remedies
An introduction to cough remediesHerbs to ease a troublesome cough

Explore more cough articles from immune system expert Dr. Jen Tan
How does honey help a cough?Has your child caught the back-to-school bug?Should you be on the lookout for hacking cough this winter?Tips for overcoming hacking cough6 taste-happy ways to treat a cough

Can back pain be due to dry cough?

Yes, back pain can be related to repeated bouts of coughing (resulting from both dry and chesty ...
Read more >

How can I get rid of my chesty cough?

This depends on the cause of your chesty cough of which there are many. I assume that you are ...
Read more >

Persistent coughing at night. What could be causing it?

There are a number of possibilities to consider. These might include:   1. An infection ...
Read more >