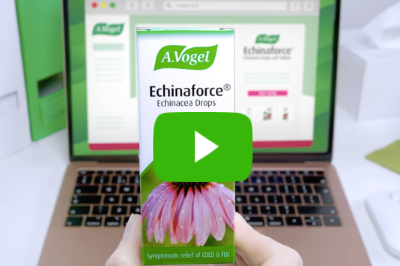 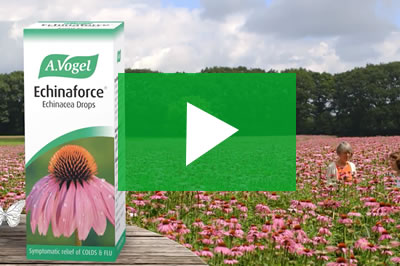 What are Echinaforce® Echinacea tablets?

Echinacea is a plant native to America but is now cultivated extensively in Europe. The plants which go into our product are cultivated organically in Switzerland at our own herb farms.

Up to 10 species of Echinacea have been identified, but only three (E. purpurea, E. angustifolia and E. pallida) are used medicinally. Echinacea purpurea is considered to be the one which has been most widely researched and this is the species we use.

Our Echinacea is produced using extracts of freshly harvested, organically grown Echinacea purpurea herb and root, picked fresh and used within 24 hours of harvest. The benefit of using freshly harvested herbs has been demonstrated in research - extracts produced from fresh plants contain almost 3 times as many active substances compared with those obtained from equivalent amounts of dried herb*.

A.Vogel Echinaforce® Echinacea tablets may be used by adults and children over the age of 12 years to fight the symptoms of colds and flu.

This remedies is for oral use only.

The other ingredients used for the tablet are potato starch, magnesium stearate and lactose.

Use in pregnancy or when breastfeeding

Do not use this product if you are pregnant or breastfeeding.

Before you use this product.

Do not use if you are:

1. What are the benefits of Echinaforce®?

Our Echinacea drops and tablets may be used to relieve the symptoms of the common cold and flu, helping the body fight these and other similar infections of the upper respiratory tract.

It works by strengthening the body's immune system.

3. Are summer colds different from ordinary common colds experienced during the winter?

No, these are similar infections and although they may give rise to different symptoms they will behave and respond to treatment in the same way.

It can sometimes be difficult to tell. Flu (or influenza) produces similar symptoms to the common cold but these are usually more severe. In addition, you may experience fever, sweats and muscle aches.

5. Can I take Echinaforce® if I've had the flu jab or vaccination?

There are no contraindications to the use of Echinacea tablets either before or after the flu vaccination.

6. What about swine flu, bird flu and any other new flu infections that may come our way during the winter?

Swine flu, avian flu (bird flu) and other variants of flu are all infections caused by the influenza virus. Echinaforce® will help strengthen the immune system and relieve the symptoms of these infections in the same way it does with other flu infections or the common cold.

There really is no proper definition for the term 'head cold'. It is a commonly used expression usually indicating that symptoms, such as a blocked nose or sore throat, are confined to the head.

8. I have glaucoma and can’t take some cold and flu remedies because they contain antihistamines. Can I use Echinaforce®?

Yes. There are no contraindications with Echinaforce® for people with glaucoma.

12. Will Echinaforce® affect my blood pressure? It is high and I have been told not to use some cold and flu remedies.

There are no known problems for people with high blood pressure taking Echinaforce®, which is an extract of freshly harvested Echinacea purpurea.

“not received my order, cant rate!”

Response from A.Vogel: We were sorry to hear that you didn't receive your order. Our Customer Care dept have rectified this for you.

Response from A.Vogel: Fantastic comments, thank you very much for your continued custom.

“Easy to use, works great and delivered to the door. Love this product.”

Response from A.Vogel: Can get much better comments than these.

“These tablets are brilliant. We’ve used them over the flu season for many years and am continuing now because of the Covid 19 situation.”

Response from A.Vogel: Thank you for your years of trust in A.Vogel's Echinaforce.

“An excellent product, well worth it”

Response from A.Vogel: What more can we add but...thanks for your feedback.

For relieving the symptoms of colds and flu. Also in 50ml & 100ml drops.
More info

Chewable tablet made with our Echinacea drops. Also in 80 tabs.
More info