Shortness of breath can occur as the bronchial tubes become restricted due to inflammation and excess mucus. Here our immune system expert Dr. Jen Tan explores what causes shortness of breath and how you can ease this bronchitis symptom with self-help tips, herbal remedies and other treatments.

An introduction to bronchitis and shortness of breath

This inflammation can also cause the membranes in the lining to start producing excess mucus, clogging the bronchi and restricting airflow to the lungs further. This can trigger coughing, the most common symptoms of bronchitis, as well as shortness of breath.

Why does bronchitis cause shortness of breath?

The narrowing of the airways due to inflammation, together with the excess mucus that is often produced, can cause airflow to and from the lungs to become restricted, which may result in shortness of breath, particularly when psychically active.

Shortness of breath is often accompanied by wheezing – a raspy, whistle-like sound when breathing. This symptom is usually only present in severe cases of acute bronchitis and should subside once the inflammation and mucus-restricting airflow has eased, which is usually after only a few days or weeks at the most.

If shortness of breath persists, it is important to contact your doctor, as it may be a sign of other lung conditions such as asthma, pneumonia or chronic bronchitis.

There are several measures you can take to ease shortness of breath caused by bronchitis. You should:

Elevate your head when sleeping: Shortness of breath can often disrupt your sleep. Elevating your head, neck and shoulders with an extra pillow or 2 may make it easier to breathe and allows the lungs to expand and drain away mucus that may be clogging your air passages.

Try pursed-lip breathing: This is a common breathing technique, which can help ease shortness of breath. It works by slowing the pace of your breathing, helping you restore your normal breathing.

To do pursed-lip breathing, breathe in slowing through your nose for two seconds, keeping your month closed. Then pucker or ‘purse’ your lips (as if you are about to whistle or blow out a candle) and breathe out slowly for four seconds. Repeat. Pursed-lip breathing can also help relieve stress and anxiety, both of which can worsen shortness of breath.

Use a vaporiser or steam inhalation: Warm, moist air can help to ease the congestion and inflammation causing shortness of breath. Inhaling moist air delivers moisture deep into the bronchial passages, where it helps to loosen mucus, making it easier to expel, as well as hydrating the bronchial tubes to help soothe irritation. A vaporiser works by heating water until it turns into hot steam.

Other steam inhalation methods include taking a hot shower or bath, as well as creating a steam tent. To do this you lower your face over a bowl filled with hot water, placing a towel over your head and bowl and inhaling the steam.

Adding a few drops of peppermint or eucalyptus essential oil to your steam tent can also help soothe your airways and can aid in breaking up any mucus.

Avoid other irritants: When your bronchial tubes are irritated, it is important to avoid any other irritants that could make your symptoms worse. Chemical fumes from paint and household cleaners, smoke, pollution, etc. can all cause your airways to restrict further and worsen bronchitis symptoms, including shortness of breath.

Reduce mucus congesting your airways: Excess mucus in the bronchial tubes often occurs as your condition progresses, which may restrict airflow to your lungs and cause shortness of breath.

It is therefore important to take measures to help your body reduce mucus production and to thin the mucus to allow you to cough it up easier. Take a look at our mucus self-help measures for lots of mucus reducing tips.

Persistent coughs are often one of the most prominent symptoms of bronchitis; these coughs may or may not be accompanied by the production of mucus and may also go hand in hand with shortness of breath.

If you struggle with a chesty or mucus cough and suspect this could be contributing to the shortness of breath, use the herbs Ivy and Thyme found in Bronchoforce to help ease your symptoms.

Ivy is naturally anti-spasmodic and can work well to help loosen any stubborn mucus, whilst thyme is gently anti-septic, helping to thin the mucus to make it easier to expel – good team work there!

Next, if an underlying infection is likely to be causing the chesty cough (this is particularly common in cases of acute bronchitis), this could also be contributing to additional symptoms such as a shortness of breath.

If this is the case, Echinaforce in combination with Bronchoforce, may be a good option for you. Echinaforce can help to minimise the duration and severity of your symptoms, whilst also supporting your immune system.

To ease shortness of breath associated with acute bronchitis, your doctor may recommend some of the following to reduce inflammation and open your airways, making it easier to breathe:

A bronchodilator inhaler:  This can help to relax and open up the air passages, helping you to breathe more easily. This will usually only be recommended by your doctor in severe cases of acute bronchitis.

Expectorants:  These can help loosen and thin any mucus that may be restricting the airflow to your lungs

Antibiotics: These will only be prescribed if your doctor thinks your acute bronchitis is being caused by a bacterial infection. 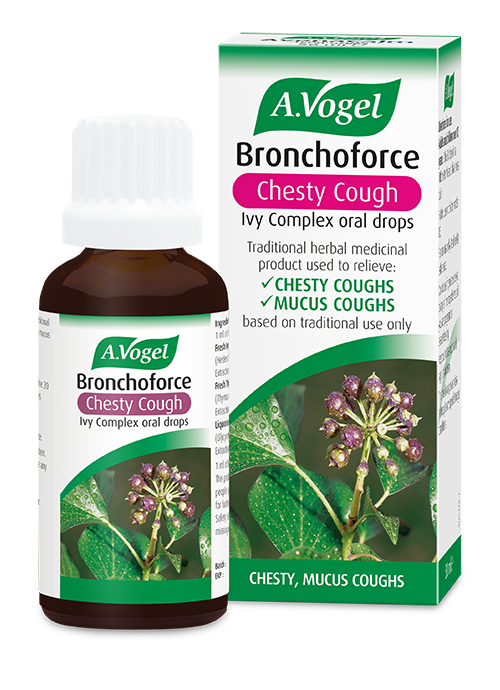