With most research indicating that the majority of the population carries the cold sore virus (HSV1), why is it that some people regularly develop cold sores, while some only develop them once or twice in their lifetime, and others don't even know they have the virus because they have never experienced a cold sore? I discuss some new research which sheds new light on this topic.

How common is the cold sore virus?

Cold sores have been described for thousands of years and it is said that the Roman Emperor Tiberius banned kissing because so many people were affected by the problem.

Cold sore viruses are usually picked up during childhood but lie dormant until years later (usually in young adulthood) when they reactivate. This causes the characteristic unsightly and embarrassing blisters which last between 7 and 10 days.

Most of us carry the HSV-1 virus in our bodies with estimates running as high as 90% of the population. However, only 20% of people in the UK suffer from cold sores – so why is this so? Why don’t all people with the virus experience outbreaks of cold sores?

This question has puzzled scientists for many years. Doctors have known that cold sores appear when the immune system is ‘run-down’ such as when under stress, or with the common cold – in fact, it is said this is reason the name ‘cold sores’ came about and why they are also called fever blisters.

What has the new research found?

This association with the immune system has only been properly confirmed recently – scientists have discovered that a particular immune protein produced by the body, called interferon-l, is key in determining whether or not cold sores develop.[1]

Interferons are a diverse group of chemicals produced naturally by the body in response to infection. They have a wide range of functions, including controlling the body’s immune response and inflammation.

This new research suggests that people who do not produce enough interferon- l may lack a specific gene and are hence more prone to cold sores. This helps explain why not everyone carrying the cold sore virus (HSV-1) suffers the problem – if you have the gene, the HSV-1 inside you won’t get the chance to activate.

So what does this all mean?

If the research is correct, some people will simply be more prone to cold sores as you cannot (easily) change the genes you have. However, the research does confirm the key role of interferons in the immune system when it comes to developing cold sores, and there are many things you can do to keep your immune system strong.

Being more careful with what you do and eat especially when you are extra busy at work or in your personal life, and being on the lookout for times when stress starts to affect your immunity, will all help.

The new research suggests that cold sores might be controlled using specific medicines. However, these are still in the future. What we have now is Echinacea which has well-established and specific benefits for the immune system. This is how it helps the body fight off the symptoms of colds and flu.

Research on Echinacea confirms that the immune strengthening effects are particularly relevant when the body is under stress. [2] All of this explains why, over the years, people have found Echinacea to be of benefit in fighting viral infections such as the common cold, flu and also, why it can help cold sores. 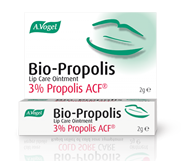 Bio Propolis - Lip Care Ointment is incredibly soothing, plus it forms a protective barrier on the lips.

To find stores in your area that sell Bio Propolis, simply type your postcode below.

Causes
An introduction to the causes of cold soresIs the summer sun causing your cold sore?Cold sore triggersCold sores: new news for an old problemWhy do I keep getting cold sores?

Treatment
An introduction to cold sore treatmentCold sores bee goneHow to get rid of cold sores.

Read more about cold sores from our expert Dr. Jen Tan
7 arginine-rich foods to avoid if you're prone to cold sores6 ways to prevent a cold sore outbreak this winter

Can someone give another person a cold sore when they have never had one before?

Yes, this is theoretically possible, although rare. When the cold sore virus enters a person’s ...
Read more >

I have a cold sore on my nose, and inside of the nostrils. Had this before? How do I get them and why?

Cold sores most often appear around the mouth but occasionally can occur either on the nose or ...
Read more >

How can you prevent cold sores and is there an injection to prevent them?

There has been talk of a vaccine against cold sores over the years, but at the moment, I am not ...
Read more >