The role of bacteria in fermentation

We know that we have beneficial bacteria in our guts, but here I explain how bacteria also play an important part fermentation processes. Fermented foods are all the rage nowadays and for good reason – they really are food for your gut!

The use of bacteria elsewhere

So, we have discussed in detail why your good gut bacteria are beneficial and why you should support them through various diet and lifestyle measures. It is well known these micro-organisms can translate positive effects to many of the different systems of the body, but, can these strains of bacteria be useful elsewhere outside of the body too?

When you hear the word fermentation you might assume we are talking about the process used to make beer. And yes, you would be right; fermentation is often used to make alcohol. But, have you ever considered how this process works?

Fermentation is a metabolic process in which a micro-organism such as yeast or bacteria converts carbohydrates or sugar into gases, acids or alcohol.

However, there are different fermentation processes with different by-products. This all depends on the different strains of bacteria and mediums of carbohydrates involved. In beer making for example, yeast is the microorganism used, it metabolises the sugars found in grains such as barley, and the end result is the production of alcohol and carbon dioxide.

But what is the end result if we subject healthy gut bacteria to fermentation?

The term ‘lacto’ in fermentation simply means that lactic acid is produced as a by-product of this particular type of fermentation.

Specific types of bacteria and fungi can be party to lacto-fermentation, for example a type of bacteria found predominantly in your small intestine called Lactobacillus.

There are lots of different species of Lactobacillus but generally these bacteria are classed as ‘friendly’ bacteria and are found throughout your digestive tract exerting their positive effects. The acids produced as a result of the fermentation they undertake, such as lactic acid, are responsible for many of the health benefits they have to offer.

However, the intriguing benefits of these bacteria go beyond the level of the gut and they are often used to ferment foods.

There is often some confusion about the use of milk products in lacto-fermentation.

One benefit of lactic acid is it that it acts as a natural preservative and therefore inhibits the growth of bad bacteria. This is beneficial both within your gut and in the case of making lacto-fermented foods. In both circumstances the good Lactobacillus bacteria are able to thrive and the lactic acid produced as a result of the fermentation keeps the bad bacteria under control.

An anaerobic environment (one without oxygen), supports the production of lactic acid (this makes the gut the perfect environment for this process to take place) and this is often adopted in making lacto-fermented foods. An air-tight container is often used.

In the production of lacto-fermented foods, such as sauerkraut, foods naturally containing lactic acid bacteria are put into an anaerobic environment with water and left to do their job! Often salt or extra friendly bacteria are added at the start of the process just to help keep the bad guys at bay which gives the good bacteria a chance to find their feet and multiply. These gut-friendly bacteria thrive within the food source, the bad bacteria are diminished and you can enjoy the tasty end result!

See our nutritionist Emma make a tasty fermented tomato ketchup recipe – so simply, yet tasty and your gut will love it!

Lacto-fermented foods are often referred to as ‘probiotics’ as they contain large numbers of gut-friendly bacteria. As whole foods are fermented, additional nutrients and beneficial agents are created by the activated bacteria. These foods are excellent nutrient-boosting additions to your diet which help keep your good gut bacteria levels topped up.

Whey is a protein found in dairy products which often makes up the watery part of milk separated from the curds as cheese is made. This component of milk has long been regarded as being beneficial to health.

During the middle ages, whey was proposed as a cure for digestive complaints and skin disorders, with arthritis also getting a mention. Alfred Vogel used whey treatment in his clinic but before long grew curious as to how to he could preserve these benefits for people who couldn’t get fresh whey. He experimented, fermenting whey, removing the fat and protein, and preserving the end result. The fermentation of the organic whey changed the natural lactose (milk sugar) to lactic acid. The end result was a pure whey concentrate, suitable for those intolerant of dairy products. We now know this as Molkosan.

Here at A. Vogel we only use whey from cows grazing on the uplands of the Swiss Alps for the production of Molkosan. The milk is naturally enriched with the many organic herbs growing in the surrounding pastures.

Why is Molkosan so beneficial?

The particular form of lactic acid (L (+) – lactic acid) produced as a result of the fermentation of whey is a natural antiseptic and inhibits the spreading of pathogenic germs on your skin, mucous membranes and throughout the whole digestive tract. It gives Molkosan a pH of 2.7, which is very beneficial for killing off unfriendly bacteria. Despite its highly acidic pH, Molkosan acts to buffer acidity in the body, therefore acting as an alkalinising agent. 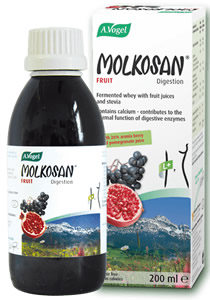 Taking Molkosan before meals stimulates the secretion of digestive enzymes throughout the digestive system. The sufficient production of digestive enzymes and allows you to break down the fats and sugars from your food more effectively.  As Molkosan has a positive effect on the production of stomach acid too, this also aids digestion of proteins and reduces the likelihood of harmful bacteria such as Helicobacter pylori infecting the stomach.

Both the Molkosan itself and sufficient stomach acid have positive effects on the pancreas. If the pancreas is working well, unfriendly bacteria find it harder to flourish.

Moving down into the gut, with plenty of L+ lactic acid in your gut, the pH will be nicely balanced. The right pH balance encourages a healthy bowel movement and supports bacteria balance, thus avoiding fermentation or rotting of food residues and the resulting gases. This is preferable for everyone, but especially for people suffering from conditions of the gut such as IBS. There is also reason to believe that prebiotics such as Molkosan can help support the efficacy of probiotics for IBS.

Molkosan enhances the resistance of the mucous membranes in the gut to unfriendly microorganisms and supports the gut environment itself by correcting the pH; this in turn allows your good bacteria to prosper and your bad bacteria to take a back seat. A healthy digestive system moves the body towards a more alkaline condition too, thought to help improve many ailments such as arthritis or fibromyalgia, which are thought to be made worse with overly-acidic environment in the body.

It seems that balance in the gut means balance elsewhere – so let’s get fermenting!

Where to buy Molkosan Fruit locally

Then look no further than Molkosan Fruit!

To find local independent stores in your area that sell Molkosan Fruit, simply type your postcode below.

Join experts Eileen Durward and Ali Cullen in the beautiful A.Vogel garden as they talk all about digestion including their tips on how to improve your digestion and how bitter herbs can make a huge difference to helping your digestive problems.

Hello. My name is Alison Cullen and I am an experienced nutritional therapist with a clinic in Ayrshire, Scotland. I currently combine running my clinic with the role of Education Manager for A Vogel. I lecture, train and write extensively on health issues, which I find endlessly fascinating.

Liked what you read? Sign up to receive my regular emails full of simple tips and advice to help you relieve your digestive troubles including indigestion, bloating and much more.

I’ve got indigestion and can’t shift it. What do you suggest?

It depends what your symptoms are. Many different things are meant by ‘indigestion’, so it ...
Read more >

Tea and coffee can be culprits especially if you drink with or immediately after meals. Mixing ...
Read more >

According to naturopathic principles, when two or three meals are being eaten daily, the bowel should move at least once or twice a day.

What are healthy bowels?