home > health > cystitis > unusual symptoms could it be cystitis

Unusual symptoms? Could it be cystitis?

Cystitis is a common infection affecting the urinary tract and bladder. In many cases, it involves some quite distinctive symptoms like frequent urination, cloudy or smelly urine or a burning sensation when going to the loo. But, did you know there may be some more unusual symptoms that you just might want to watch out for? These include:

I'll explain why it's important that you look out for these symptoms and suggest some natural ways you can combat cystitis.

Although some people may not associate cystitis with back pain, it's definitely one to watch out for. Although cystitis is not normally a serious infection, if the bad bacteria responsible start to make their way up towards your kidneys, this can become much more serious.

If you are susceptible to cystitis and are experiencing back pain, I would recommend you have this checked by your doctor.

Inflammation and bloating go hand in hand, unfortunately. As immune cells within the blood rush to our aid, the surrounding area around the bladder can become quite swollen, and water retention is often more likely too.

Also, if you have an infection in your urinary tract, there may be links with dysbiosis in the gut – we know that an imbalance in our gut bacteria can give rise to a number of undesirable symptoms.

In fact, poor digestion (specifically constipation, which can cause uncomfortable bloating and pain) has a link with cystitis so this can become a vicious cycle if it's not dealt with. Drinking plenty of plain water is a good rule of thumb for both constipation and cystitis.

Thrush is caused by a type of yeast infection rather than by bacteria but, once established, it can make its way into the blood and even cross the blood-brain barrier – hence the confusion that can follow.

So, if you're confused about feeling confused, this is something to consider, and this is especially one to watch in the elderly – get yourself along to the doctor as soon as possible.

Dizziness is another symptom to have checked by your doctor as it could indicate that the infection has spread and/or a yeast infection is at play.

Alternatively, another less sinister possibility is that you are dehydrated as a result of frequent urination, or because you aren't drinking enough. Often, this happens as people are scared that, if they drink too much, they will need to go to the loo more than ever. This is a common mistake and, actually, it is much more beneficial in the long run to drink that little bit extra.

As I've mentioned, always make sure you are drinking plenty of plain, still water – at least 1.5 litres daily. Then, even better, why not add in a glass or two of good quality, low-sugar Cranberry juice daily? This has been found to help protect against recurrent infections.

As your immune system works super hard to keep an infection like cystitis at bay, you can be left feeling quite drained. Watch your diet and avoid sugar, which will only make things worse by contributing to greater dips and spikes in your blood sugar levels, impacting your low energy symptoms. Ensure you get plenty of rest to give your body some valuable time to repair and restore.

Also, although the exact reasons aren't very well understood, there are thought to be links with interstitial cystitis and fibromyalgia or chronic fatigue syndrome. If you think these may be relevant to you, go and see your GP.

Take A.Vogel's Uva-ursi & Echinacea drops 5 times daily to help overcome symptoms of cystitis. You remain vulnerable after a bout of cystitis, so it's important to prevent reinfection by following good hygiene practices.

These drops can be taken for up to 6 weeks at a time, but you should talk to your doctor if your symptoms do not improve after 7 days.

"Marvellous product that does the trick."

Headaches could also be the result of dehydration, but they could also be a sign that something which was originally cystitis has now moved towards the kidneys and become something more serious. This is especially likely if this symptom is accompanied by some others, such as a fever. As always, if in any doubt, visit your doctor as soon as you are able for a check-up.

Experiencing itchiness at the same time as cystitis doesn't necessarily mean it's related to the bacterial infection itself, but it could indicate something else could be going on too, such as a yeast infection.

Although cystitis doesn’t necessarily cause thrush or vice versa, some common factors, such as in imbalance in good gut bacteria, could put you at risk of developing both conditions, so they very often go hand in hand.

Nausea isn't a typical symptom of cystitis. But, if cystitis is left untreated, it can develop into pyelonephritis or a kidney infection, in which case nausea may become apparent.

If nausea is problematic and you aren't quite sure what might be causing it, I would recommend you go to a doctor to rule out any possible issues that might be cause for concern.

Results: How often do you suffer from cystitis? 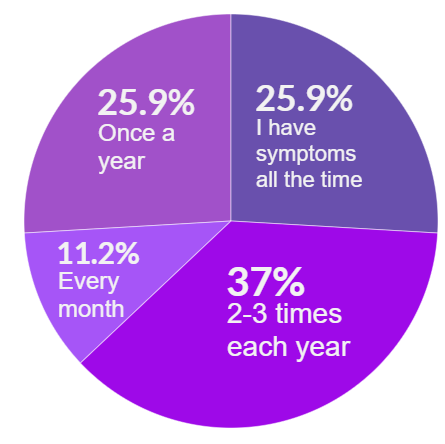 37% of you said that you suffer from cystitis 2-3 times per year, with just over 1/4 suffering from constant symptoms or experiencing cystitis once a year. To help prevent recurring cystitis, try cutting back on sugary drinks and alcohol and get into the habit of drinking plenty of fresh, plain water every day.

Where to buy Uva-ursi and Echinacea tincture locally

Looking for a solution to relieve symptoms of cystitis?

Look no further. Our Uva-ursi and Echinacea tincture is a licensed herbal remedy used to relieve symptoms of cystitis in women.

To find local independent stores in your area that sell Uva-ursi and Echinacea tincture, simply type your postcode below.

Uva-ursi and Echinacea – for cystitis

A combination of the fresh juice of organic cranberries together with birch and agave nectar.
More info

Treatment
An introduction to cystitis treatmentDiet for cystitisTreating cystitis at home

Read more cystitis articles from cystitis advisor Emma Thornton
5 reasons for an overactive bladder at nightA guide to the best and worst drinks if you suffer from UTIsAre UTIs more common as we get older?Why is cystitis worse at night?Does drinking lots of water help cystitis?Why do I get cystitis during my period?Why do I need to pee more in cold weather?Can IBS cause cystitis?Can men get cystitis?Can probiotics prevent cystitis?Chronic cystitis and how to overcome itCould stress be triggering cystitis?Coping with cystitis at workCould your dinner put you at risk of cystitis?Cranberry juice for cystitis - what's the evidence?Cranberry juice for female health - how can it help?Cystitis during menopause - why is it more common?Cystitis myths debunkedDitching cranberries for UTIs - is it the right advice?How to overcome summer cystitisIs there a link between cystitis and gout?Is there a link between cystitis and thrush?Still recovering from cold or flu - could it be contributing to cystitis?Stress and UTIs - what's the link?Sweet tooth? Could it be contributing to cystitis?Unusual symptoms? Could it be cystitis?UTIs - when are antibiotics necessary?Why do I keep getting cystitis?When are you most prone to UTIs?Why is cystitis more common in women?

Will changing my diet help with cystitis?

There are many helpful things you can do diet-wise to reduce the likelihood of cystitis. • Drink ...
Read more >

No, it’s a bacterial infection that cannot be caught and cannot spread to another person. It may ...
Read more >

How is cystitis diagnosed?

A urine sample is given to the doctor, who sends it for testing. A urinary tract infection is ...
Read more >

Can cystitis and thrush be linked?

If you suffer from both recurring thrush and cystitis, or find that when you develop one, the other follows soon after, you’ll know how frustrating it can be.

Find out what the link is

Cystitis is sometimes known as ‘honeymoon cystitis’. Why? Well, during sex, bacteria can spread from the perineum to the urethral opening. The risk of developing cystitis is therefore increased depending on the frequency you have intercourse (sorry honeymooners!).

7 reasons you keep getting cystitis