home > health > cystitis > why wont my uti go away

Why won’t my UTI go away?

Struggling with recurrent or persistent UTIs? Here I explore some reasons why, plus detail how you can help get UTIs under control once and for all.

Why won’t my UTI go away?

If you have recurrent or persistent UTIs, plus, antibiotics aren't helping, you might rightfully wonder why your UTI won't go away. This can be down to the treatment choice not being suitable for the type of infection underlying, the true cause of the infections not being determined, or because you're not recovering sufficiently from an initial infection.

Here I explore the reasons in more depth, as to why your UTIs might not be going away for good:

So, it could be case that the antibiotics you've been prescribed antibiotics aren't working, and this could be for a few reasons. We need to remember that antibiotics are targeting a bacterial infection and sometimes, quite specific strains of bacteria as well. So, a type of E. coli is quite often the cause of UTIs, but of course, this can be variable.

So, first of all, there is that specific strain of bacteria to consider. If it's not a bacterial infection, to start with, then the antibiotics aren't going to work. So that could be that there's a different underlying cause in terms of different micro-organisms; yeast, or fungus, for example, may be contributing in some cases, as I'll go onto in more detail shortly.

But we also have the topic of antibiotic resistance to consider. In that, some strains of bacteria are starting to become resistant to the antibiotics, so this could also be a factor in some cases.

A vicious cycle can also risk forming when it comes to the antibiotics. So, antibiotics are not only targeting the bad bacteria, but as they're doing this, they can also harm some of our good bacteria. And with this, we need to consider the bigger picture, and the real underlying causes of UTIs.

See, for protection against UTIs, in most cases, we can really benefit from a lovely variety of good bacteria, as this state naturally helps to keep the bad bacteria at bay, (and this where we should also consider the different diet and lifestyle strategies that you can take on board in order to support your good bacteria.

Now, what can you do? One tactic could be to try an alternative to antibiotics such as the Uva-Ursi & Echinacea Complex.

This remedy is likely to be less strain-specific, unlike some of the antibiotics, so, can often be worth a try in most cases. However, please note, much like the antibiotics, if this wasn't working, we would be wanting you to stop this treatment and go back to your doctor for further investigation.

Initially, you can take Uva-Ursi & Echinacea Complex up to five times daily, but if that hasn't worked within seven days, then we would say to go back to your doctor for further investigations. 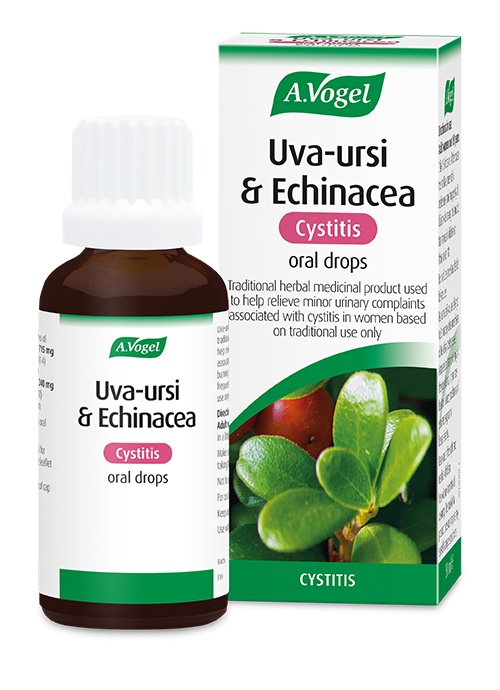 If you've employed the wrong treatment, then this may well be why you're not getting success with eradicating persistent infections.

Now, I've already talked quite a bit about antibiotics, so, in this case, it would definitely need to be a bacterial infection for this tactic to work, and then we have the antibiotic resistance and all these other issues to consider as well.

I've talked a bit about interstitial cystitis too, and in this respect, explained that the true underlying cause there isn't so likely to be bacterial. Therefore, in this case, we would then need to delve into potentially how else we might treat this, if it was a case of interstitial cystitis.

This state might be associated with underlying issues such as inflammation or constipation (or stress, or nutrient deficiencies too). So again, it always helps to try and tease apart the likely causes, which will then help to better inform your treatment.

Next there could be structural causes that could be contributing. That's quite often the case in menopause, for example, or post-menopause, and there are also just hormones more generally as well.

So, if people are on hormonal contraceptives or just low in oestrogen, either in their child-bearing years or menopause. Again, oestrogen can have quite a significant impact on the structure in around the urinary tract and the bladder, and that can influence how bacteria are able to thrive and survive, or give rise to unwanted inflammation. So again, if the likely cause is likely to be hormonal, for example, then, you know, something like antibiotics aren't necessarily going to be the most suitable treatment. It's always best to target the likely underlying cause, more specifically.

Now, I've also talked through the bacteria in terms of this being the most common cause, but we know that there may be a different type of infection underlying, in which case, the antibiotics may not be the best approach. So, there could be a fungal infection, there could be yeast imbalance, so you've got bacteria and you've got yeast, again, in and around the digestive tract, vagina, urinary tract.

These areas can all be quite influenced by these different micro-organism balances. So, there could be a different type of infection that we're missing, and therefore the treatment would be quite a different approach.

And of course, if you need any help trying to determine the cause or different suitable treatment ideas and options, then please do get in touch with us at A.Vogel helpline. We'd be happy to try and explore that a bit more with you, or we can also recommend different resources and places for you to go such as looking into seeing a nutritional practitioner, and they could look into your individual case in more detail as well.

3. The cause is still there

So, although we've covered a few of these themes already, I'd like to reiterate that if you're UTI just isn't going away; if it's persistent or recurrent, then perhaps the underlying cause is still there.

Perhaps you're just missing the mark and not quite understanding the true cause, and hopefully, with further investigations, we can help determine that.
Now, I spoke a bit about hormones. So, during your child-bearing years, perhaps there's PMS at play, a hormone imbalance apparent, or there's a pregnancy where different balances of hormones are changing.

If you're on hormonal contraceptives, these are purposely creating quite a specific hormone imbalance to help protect against pregnancy (or treat other symptoms, in some cases). But it might be that this imbalance of hormones, while it's achieving something such as protecting against pregnancy, it could be driving some other symptoms such as UTIs, for example.

So again, it's just looking at the bigger picture and trying to determine what some of the causes may be and then how we can we can target them via those underlying causes.
Then, we've got blood sugar regulation to consider as well. This can be influenced by diet and underlying inflammation. Then, if blood sugar dysregulation and insulin resistance translate into diabetes, then your blood sugar balance is even more off, and that can affect your urine. So this state could also drive more infections, also be encouraging more yeast infections.

Next, dehydration can also be an underlying factor in many cases, although perhaps in combination with some other too.

But certainly, dehydration could risk driving more bacterial infections if the urine is quite concentrated. And then there are those structural considerations as well.

As I mentioned, post-menopause (e.g. with situations such as prolapses), or with enlarged prostate (in men) could also have some negative impacts. So again, just lots of potential other causes that aren't always the obvious bacterial infection, although these states could also give rise to these types of infections too (traditional cystitis).
Next, we've got stress and constipation, two factors which are quite common, especially in cases of interstitial cystitis as well, and again, interestingly where the root cause isn't thought to be a typical infection.

Toiletries, harsh toiletries could be upsetting your good bacteria too; affecting the pH in and around the urinary tract. Again, if you're using these things daily, that could be having quite a significant effect.

Last point, just something else to think about, is if you aren't recovering properly. And this is quite often one of our points across the board, so, for example when you come to consider cold and flu infections and things; but also, very relevant for your urinary tract.

We've also got, again, structure to consider. Within the structure of your urinary tract, if the mucus membranes that line your urinary tract don't recover after one infection, if they become damaged and weakened, then bacteria is more able to get in for a second time. And that can easily turn into quite a vicious cycle as well.

This situation is where we might start thinking about more specific urinary tract support and supporting those urinary tract cells. So, something like a source of Nature-C, which is a natural source of vitamin C. Vitamin C is a lovely protective antioxidant, just to help offer your cells that little bit of support.

Where to buy Uva-ursi and Echinacea tincture locally

Looking for a solution to relieve symptoms of cystitis?

Look no further. Our Uva-ursi and Echinacea tincture is a licensed herbal remedy used to relieve symptoms of cystitis in women.

To find local independent stores in your area that sell Uva-ursi and Echinacea tincture, simply type your postcode below.

A combination of the fresh juice of organic cranberries together with birch and agave nectar.
More info

Treatment
An introduction to cystitis treatmentDiet for cystitisTreating cystitis at home

Read more cystitis articles from cystitis advisor Emma Thornton
5 reasons for an overactive bladder at nightA guide to the best and worst drinks if you suffer from UTIsAre UTIs more common as we get older?Why is cystitis worse at night?Does drinking lots of water help cystitis?Why do I get cystitis during my period?Why do I need to pee more in cold weather?Can IBS cause cystitis?Can men get cystitis?Can probiotics prevent cystitis?Chronic cystitis and how to overcome itCould stress be triggering cystitis?Coping with cystitis at workCould your dinner put you at risk of cystitis?Cranberry juice for cystitis - what's the evidence?Cranberry juice for female health - how can it help?Cystitis during menopause - why is it more common?Cystitis myths debunkedDitching cranberries for UTIs - is it the right advice?How to overcome summer cystitisIs there a link between cystitis and gout?Is there a link between cystitis and thrush?Still recovering from cold or flu - could it be contributing to cystitis?Stress and UTIs - what's the link?Sweet tooth? Could it be contributing to cystitis?Unusual symptoms? Could it be cystitis?UTIs - when are antibiotics necessary?Why do I keep getting cystitis?When are you most prone to UTIs?Why is cystitis more common in women?

Will changing my diet help with cystitis?

There are many helpful things you can do diet-wise to reduce the likelihood of cystitis. • Drink ...
Read more >

No, it’s a bacterial infection that cannot be caught and cannot spread to another person. It may ...
Read more >

How is cystitis diagnosed?

A urine sample is given to the doctor, who sends it for testing. A urinary tract infection is ...
Read more >

Can cystitis and thrush be linked?

If you suffer from both recurring thrush and cystitis, or find that when you develop one, the other follows soon after, you’ll know how frustrating it can be.

Find out what the link is

Cystitis is sometimes known as ‘honeymoon cystitis’. Why? Well, during sex, bacteria can spread from the perineum to the urethral opening. The risk of developing cystitis is therefore increased depending on the frequency you have intercourse (sorry honeymooners!).

7 reasons you keep getting cystitis