We have a very special guest post here at A.Vogel from Yvonne over at Jan de Vries. Over the years we’ve noticed that some supplements and remedies go in and out of fashion, but we think turmeric is here to stay. Not only is it super tasty, it also has loads of great health benefits! However, as with any popular product, there is often a bit too much hype over what it can do. So today, Yvonne is talking about 6 things that turmeric can actually be used for.

Why has turmeric become so popular?

Turmeric is a yellow/orange spice, commonly used in Asian cooking such as curries and stir fry. It comes from the root, or rhizomes, of the turmeric plant, and contains a group of compounds called curcuminoids.

Research has shown that the curcuminoids in turmeric have anti-inflammatory properties, which makes it an incredibly useful supplement these days. Modern life is full of inflammation triggers, including red meat, sugar, processed foods, caffeine and stress.

Some of this inflammation is severe, contributing to problems like arthritis and IBD, while in some cases it is subclinical – a type of low-grade inflammation that is difficult to detect by the usual measurements.

It can contribute to a range of problems, like low mood and even insulin resistance. In recent years turmeric has become increasingly popular, both for its medicinal uses and its great taste – you can now even get a turmeric latte in Starbucks! This image from Google Trend indicates how quickly turmeric is rising in popularity:

Arthritis is a horrible, chronic condition that can slowly reduce movement and make daily life difficult and painful. There are a number of causes of arthritis, from genetics to weight issues, but all involve some kind of inflammation of the joints. Science seems to back up the use of turmeric to ease arthritis symptoms.

A systematic review and meta-analysis of a number of studies concluded that 8-12 weeks of turmeric supplementation – typically 1000mg a day of curcumin – reduced arthritis symptoms1.

IBS is a complicated condition which can be easily triggered by foods, stress and a number of other factors. Treating it is very difficult, and treatments range from diet restrictions to prescribed medication. IBD on the other hand, is caused by chronic inflammation or swelling of the intestines.

While severe inflammation plays a huge role in IBD, recent research has also suggested that low-grade inflammation can be found in patients with IBS as well.

As an anti-inflammatory, it makes sense that turmeric could help both of these conditions, though it may be most useful in tackling the low-grade inflammation of IBS. In fact, one study found that an 8 week course of turmeric reduced IBS symptoms by up to 60%2.

That’s right, something that can finally help your agonising period pain! While there isn’t a huge amount of research about period pain and turmeric specifically, turmeric has been proven to act as an anti-inflammatory and therefore could be extremely useful for tackling period pain naturally.

Given what we know about turmeric’s anti-inflammatory effects, it seems sensible that it could therefore help to ease period pain.

The curcumin found in turmeric is a potent antioxidant, helping to clear the body of harmful free radicals. Free radicals are unstable molecules that can damage the molecules around them, which leads to damage of cells and tissues.

In some cases they can damage DNA, which can result in the malfunction or mutation of cells. Some of these free radicals are made naturally by the body and dealt with by the enzymes already in our body. However, things like pollution and stress can create higher levels that the body may struggle to scavenge on its own.

Antioxidants travel through the body and help to neutralise these free radicals, thus protecting our cells and tissues, and turmeric is a particularly good source of antioxidants!

There is some evidence to suggest that turmeric can help to combat low mood, mood swings and even depression. One study gave depressed participants 1g of curcumin a day for 8 weeks and found that mood-related symptoms significantly improved3.

It was a small trial of only 56 participants but showed promising results! There are several arguments as to why curcumin could help depression and mood problems. One theory is that these problems can be caused by low-grade inflammation which is hard to detect through tests. Since curcumin is a natural anti-inflammatory, it can counter this inflammation.

As always, I’d recommend speaking to your doctor if you suspect you suffer from depression before trying to self-medicate naturally. However, for low mood or mood swings, you may find that turmeric can help provide some balance.

In fact, increased circulation can help to effectively deliver nutrients and remove toxins from all our major organs, resulting in overall better health. Of course, this is provided you are also following a healthy lifestyle – improved circulation won’t do much good against that supersized McDonald’s!

How to take turmeric 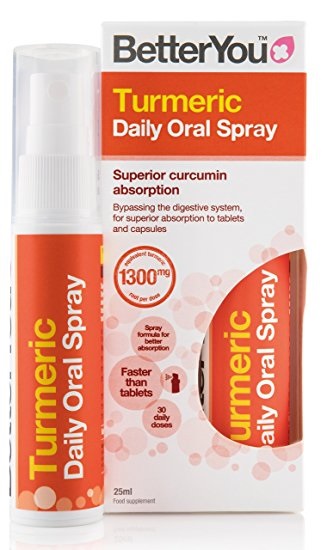 There are lots of turmeric supplements out there, but one major problem is that it is often poorly absorbed by the body, with sometimes as little as 1% being absorbed.

That’s why I always recommend a liquid form, particularly BetterYou’s fantastic Turmeric Oral Spray. This is sprayed onto the inside of the cheek so that it absorbs directly into your system, bypassing the digestive system altogether.

Now you might be thinking, ‘won’t that taste a bit potent?’ ‘Will the yellow colour not stain my teeth?’ Well, BetterYou have formulated their spray using molecular encapsulation, which not only makes it water soluble and easier to absorb, but also reduces taste and staining. In fact, there’s some natural orange oil added to give a lovely orange flavour instead!