home > food > could fizzy water be making you fat

Could fizzy water be making you fat?

Here at A.Vogel we are big advocates of drinking water. Having enough H20 can have surprising effects on almost everything from your bowels to your skin, and so, for most of our health advisors, water is high on their tick list of solutions when it comes to tackling a number of common ailments. But, we are very often asked if different variations count, from hot drinks made with water to fizzy varieties! Here I set the record straight and explore the evidence – could fizzy water be making you fat?

What’s the big deal about water?

We know that drinking enough water is super important for a whole number of important bodily functions. Keeping your bowel moving or your skin glowing are more obvious reasons but actually, we know that dehydration can affect our urinary tract,  muscles and joints, mood, symptoms of PMS, symptoms of enlarged prostate, cognitive functions, circulation, and symptoms of menopause – that just about covers everything!

A good intake of water is pivotal for a whole number of physical and biological processes and upping your intake really can make a difference to how you look and feel. If you’ve tuned into any of our blogs or articles here at A.Vogel before, you’ll notice we often recommend aiming to drink 1.5l of plain, still water daily. Now, people often ask if it really needs to be ‘plain’ or ‘still’. And my response is, yes! With the exception of the addition of some herbs or fruit perhaps, but on the whole – yes. But, why?

Firstly, people often ask if their daily tea or coffee counts as water intake. That’s a resounding no. These are loaded with caffeine, especially coffee, but to a lesser extent, even some of the healthier herbal teas, which means they can act as a milder diuretic. In addition to this, caffeine can have adverse effects on the nervous system, making us feel more jittery or anxious, so basically working against some of the benefits that water can bring. So be sure to keep your water intake up in addition to any other drinks you might have during the day.

Next, what about flavoured waters or diluting juice? Many of these are loaded with sugar so those are definitely ones to watch, and then even those made with artificial sweeteners aren’t much better. Research suggests that even artificial sweetness could impact your blood sugar which can have a domino effect on your blood sugar levels and appetite1, so again these aren’t ideal.

Ok, and finally what about carbonated or fizzy water, these are still just water so it shouldn’t make a difference, right? Not exactly – let’s explore this in a little more detail in light of some new research...

What does the research say?

BBC’s Trust Me, I’m A Doctor recently collaborated with Aston University in Birmingham to investigate whether or not fizzy water could have negative effects on your waistline.

The study involved fasted participants being given equal quantities of food before testing the effects of four different drinks on their appetites. The drinks included a fizzy soft drink, a flat soft drink, fizzy water and flat water. Blood samples were taken to look at ghrelin levels – the hormone that signifies hunger in the body, and food diaries for the period afterwards were also analysed.

Results showed that having a fizzy soft drink compared to the flat alternative increased ghrelin levels by a whopping 50%! The results in the water condition weren’t quite so marked but there was still a trend for the same pattern. This increase in the hunger hormone translated into more calories being consumed later, as was to be expected. Increases in as much as 120 calories were seen after the fizzy drink option versus the flat variety. That’s equivalent to a medium sized banana or half a sandwich, so quite a substantial difference!

What mechanisms could be involved?

Although we’ve always suspected that plain water is preferable to fizzy water, here, in light of this new research, are some possible mechanisms as to what could be going on:

So, what’s my advice going forward?

In the past it has been suggested that carbonated drinks could potentially help to keep us feeling fuller for longer, so this can be confusing. But for me, something just didn’t ring true. After all, these drinks aren’t natural and many years ago carbonated drinks didn’t exist. So it isn’t hard to believe that they may be having some sort of adverse effect – like so many unnatural ingredients!

However, in saying that, only a handful of studies have suggested there may be significant effects of carbonated drinks on appetite and calorie intake, so it is still early days. But why take the risk? My advice is as follows: 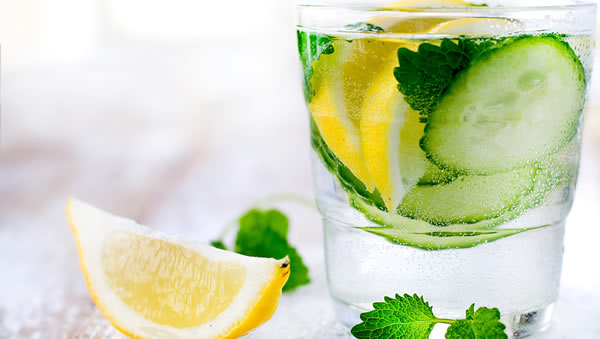