Can an enlarged prostate cause UTIs?

We know that UTIs, or simply bladder infections, are common in women, but could an enlarged prostate (BPH) contribute to similar infections in men? Today I’m discussing the extent to which this is a risk, and what to do if you think you have a bladder infection.

How does an enlarged prostate affect the bladder?

As the prostate begins to swell it can start to affect different parts of the urinary system. It can begin to tighten around the urethra, making it harder for urine to flow through the narrow tube. It can also start to press on the underside of the bladder and can even reduce the amount of space available in the bladder.

Due to the narrowing of the urethra, some of the common symptoms of an enlarged prostate include a difficulty starting urination, and a weak stream or poor flow when you do start. You may also find that your bladder doesn’t quite feel empty afterwards. In serious cases, the urethra can become completely blocked, causing urinary retention.

As a result of the prostate pushing on the bladder, you’ll probably also find that you need to urinate more often, and that the urge to urinate can come quickly and suddenly.

Can BPH cause bladder infections in men?

In some cases, it is plausible that an enlarged prostate could cause a UTI, depending on the symptoms you’re experiencing and their severity.

Urinary infections are generally caused when stagnant urine sits in the bladder for too long, as this gives bacteria time to multiply. If your main symptoms are frequent and urgent urination then this is less likely to be a problem as your bladder is being regularly emptied.

However, if your symptoms are usually things like difficulty starting urination or difficulty fully emptying the bladder then this could become a problem, as these symptoms could cause urine to sit in the bladder for too long.

In some cases, men try to reduce their intake of water in an attempt to reduce the frequency with which they’re going to the bathroom, but this can actually make things much worse! Not only will the acidic urine irritate your bladder and potentially worsen symptoms, but concentrated urine also provides an ideal breeding ground for bacteria.

If you experience a total inability to empty the bladder, you must go to the hospital where they can empty your bladder using a catheter.

What are the symptoms of a UTI?

However, there are a few indications of a UTI that differ from those of an enlarged prostate. Look out for unpleasant-smelling urine, cloudy urine and a burning sensation when urinating. Take a look at our cystitis symptoms pages for a better idea.

What is the difference between prostatitis and a UTI?

This is another situation where symptoms are very similar.

Interestingly, the source of this infection is often a UTI, as the bacteria from the bladder can make their way into the prostate. So, where an enlarged prostate can cause UTIs, prostatitis can be a result of a UTI, and they symptoms of all three can overlap. You can see how they can easily get mixed up!

Prostatitis can have very similar symptoms to both UTIs and an enlarged prostate, including pain when urinating, frequent and urgent urination, using the toilet during the night and difficulty starting. However, a few key differences are that it can also cause general pain in the pelvic area, can affect sexual function and can occur in men of all ages. It’s particularly common in men aged between 20 and 40.

What to do if you think you have a UTI

The first thing you should really do is go to your GP so they can double check that this change in symptoms is definitely a bladder infection. If you haven’t been diagnosed with an enlarged prostate yet, then it is vital that you go to the GP, because if BPH isn’t causing your infection then it is important to make sure there is no underlying problem such as diabetes.

The doctor may prescribe you antibiotics to help shift the infection, particularly if it is severe. However, there are also a few ways to treat a UTI at home:

Drink plenty of water. This will help to flush the bacteria out of the bladder and will make urination less painful.

Try cranberries. Cranberries are commonly used to ease UTI symptoms, as they are thought to prevent bacteria from sticking to the bladder walls, making it easier to flush them out. However, cranberries can be incredibly bitter, so most cranberry juices are full of sugar. Instead I‘d recommend our own Cranberry Complex, which contains fresh cranberry as well as other bladder-friendly herbs like horseradish and golden rod. You could also try Biotta’s Cranberry Juice, which is sweetened with agave nectar and birch leaf infusion.

Top up on vitamin C. This vitamin is famous for supporting the immune system, so it can help your immune cells fight off the infection.

Interestingly, implementing these small changes long-term can also help to prevent a UTI from occurring in the first place.

Can treating your enlarged prostate help?

If your UTI is indeed the result of an enlarged prostate, then taking steps to treat this condition may help to prevent further infections.

The traditional herbal treatment for an enlarged prostate is Saw Palmetto, which you can find in our Prostasan capsules. This remedy is used to reduce the symptoms of your enlarged prostate. 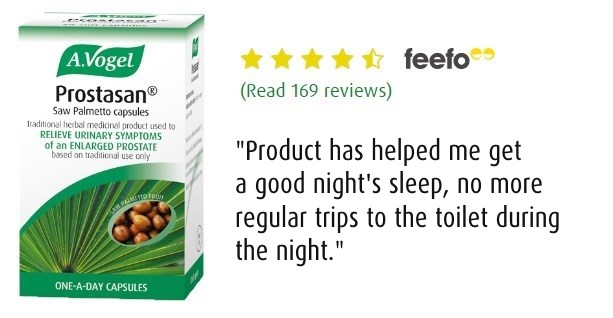 Aside from Prostasan, you should also reduce your intake of inflammatory foods – red meat, dairy, sugar, processed foods and alcohol – and fill up on lots of fresh vegetables, fruit, complex carbohydrates, nuts and seeds. Pumpkin seeds have been found to be particularly effective in helping BPH symptoms, so give these a go! I love them toasted in the oven with a sprinkle of paprika.