How does alcohol affect an enlarged prostate?

From pints in your local pub, to the red wine in your spaghetti bolognaise, alcohol features in many a weekly routine. In a study completed by the Office for National Statistics in 2017, only 20% of adults said they were teetotal. Despite how often, and how many of us, turn to alcohol though, it can prove problematic. When it is drunk excessively it can increase the risk of developing heart disease, for example, as well as liver disease and strokes. Alcohol can also have a number of negative effects on symptoms of an enlarged prostate.

Is alcohol bad for an enlarged prostate?

An enlarged prostate is an extremely common condition amongst men over the age of 50, with symptoms including frequent urination and poor urine flow. For those with the condition, alcohol can have a number of effects.

A study published in the American Journal of Epidemiology concluded that moderate alcohol consumption actually benefited BPH symptoms. It must be noted, however, that, when participants consumed a large amount of alcohol, the condition actually worsened.1 Researchers also concluded that any benefits of drinking alcohol for an enlarged prostate may be outweighed by the negative effect it has on urinary symptoms.

So, I wouldn’t go reaching for the beer to ease your symptoms just yet…

As men get older the prostate gland, which sits near the bladder, tends to get bigger. This is known as an enlarged prostate, or benign prostatic hyperlasia (BPH), and can contribute to symptoms such as frequent urination and poor urine flow.

Alcohol is inflammatory in its effects, which means that it worsens the inflammation that is already present in the prostate cells, thus blocking the flow of urine further.

If you’ve ever had a few too many drinks on a night out you’ll appreciate that the muscles don’t always work so accurately with alcohol in the system. This doesn’t just apply to the arms and legs, though, and instead it can affect the efficiency of the muscles in the bladder too.

In contrast, on some occasions alcohol causes the muscles in the neck of the bladder to tighten and as such it becomes more difficult to urinate. Poor urine flow is a common enlarged prostate symptom and from this we can see how alcohol can make the situation worse. 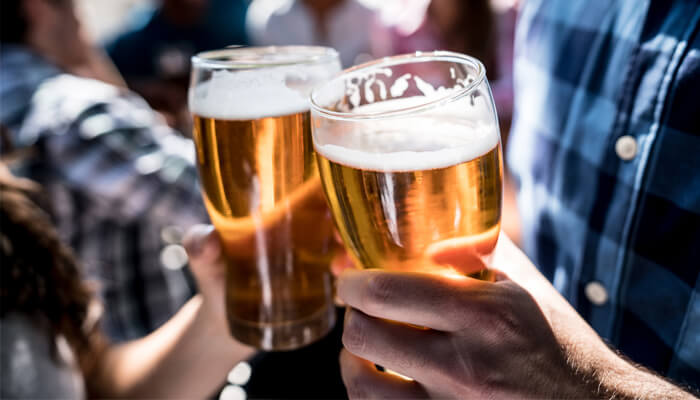 Drinking lots of alcohol like beer and wine tends to displace any water you may otherwise have been drinking. This reduces the ‘prompt’ for the kidneys to release fluid and, in turn, it can make it more difficu.lt to urinate

Alcohol also drains our magnesium stores which impacts negatively on kidney function, on muscle function and on the way nerve messages are delivered. All of these things affect our urinary habits, making it either more difficult to pee, or easier. The latter can worsen enlarged prostate symptoms such as the need to use the toilet at night.

5 – Alcohol increases the urge to urinate

Alcohol is a diuretic meaning it raises the amount of urine that enters the bladder and increases the urge to urinate. There is also the issue that alcohol acts as an irritant to the bladder thus making urinary symptoms worse still.

Can alcohol increase the risk of developing an enlarged prostate?

There are a few things that put men at risk of developing an enlarged prostate. The condition is most common amongst men over the age of 50 so age has a big part to play. Hormone levels also fluctuate as we get older (yes, it isn’t just women this happens to!) and this may also contribute to the problem. In addition, lifestyle factors such as lack of exercise and smoking may also increase the likelihood of developing an enlarged prostate.2

A number of studies have investigated the effects of alcohol on an enlarged prostate. Whilst there is a clear link between alcohol and worsening enlarged prostate symptoms, the evidence is less clear cut in regards to whether or not alcohol actually increases, or decreases, your risk of developing the condition.

In general, stick to the recommended alcohol intake. Adults are advised not to drink more than 14 units of alcohol a week (that’s around 6 pints of beer or 6 glasses of wine) and it is best to spread this intake out evenly over the course of a week.4 If you are wondering how to reduce your alcohol intake, you can find helpful resources from the NHS here.

What can I drink for an enlarged prostate?

There are a number of drinks that are beneficial for the prostate gland when it is enlarged. Green tea can be helpful as it may reduce inflammation, plus it has anti-viral and anti-bacterial properties to keep infections at bay. These are more common amongst men who cannot empty their bladder properly because of an enlarged prostate.

Although green tea does contain caffeine, which is known to be problematic for sufferers of an enlarged prostate, the quantities are very small. Also, the antioxidant and anti-inflammatory nature of green tea outweigh any negatives.

Drinking plenty of water is also super important as it reduces the concentration of urine in the bladder thus easing irritation in the area. I’d recommend increasing your intake gradually though, to avoid any adverse effects like more frequent urination.

So, what are the key points you should take away from this?