Plus tips on promoting heart health

What do the statistics say about gender and heart disease?

The British Heart Foundation’s 2017 statistics[1] explore the differences in mortality rates as a result of heart disease between men and women.

Under the age of 75, men are more likely to die from chronic rheumatic heart diseases, hypertensive diseases, coronary heart disease, strokes and diseases relating to the arteries and capillaries than women are.

However, this is not to say that women under 75 have no risk, since, according to the British Heart Foundation, cardiovascular disease accounts for 17.2% of all deaths in women under the age of 75 (Fig. 1.2b).

Over the age of 75 this gap begins to close, with women becoming more likely than men to die from chronic rheumatic heart diseases, hypertensive diseases and strokes, and over the age of 85, women are more prone to all types of heart disease than men (Table 1.1).

So as you can see, the argument of who is more prone to heart disease is not quite so clear-cut!

Why could men be more prone to heart disease?

There are a few potential reasons why there are such dramatic differences between heart disease in men and women.

Historically, men tended to occupy more stressful job roles while women generally stayed at home, and this is thought to be one reason why men are typically associated with higher heart disease risk.

However, according to the British Heart Foundation, this gender gap has actually been closing since 1969 (Fig. 1.3), and one explanation for this could be that, due to evolving gender equality, more and more women are occupying high-stress job roles.

Another problem lies in how men deal with stress compared to women. When men are stressed, their arteries tend to constrict, increasing their blood pressure[2]. For someone who already has a narrowing of the arteries, this could be a major problem.

On a behavioural level, women are more likely to share their feelings with others and take time for self-care (such as reading or taking a bath) effectively reducing stress, while men are typically more likely to bottle everything up. This means that over time, the effects of stress could take a bigger toll on men’s bodies.

Unfortunately, men tend to lead unhealthier lifestyles than women, and this can have a big impact on heart health.

Alcohol intake is an important risk factor for heart disease, and, according to Heart UK, around 37% of men regularly exceed the government recommendations for alcohol intake, compared to 28% of women.

Part of this comes down to differences in eating habits, but differences in cultural expectations also play a part. In general, men tend to eat more meat than women, and they also eat significantly more red meat[4]. This may be partly due to the fact that eating meat – particularly red meat like steak – is often seen as more ‘masculine’. On the flip side, another study suggested that women eat 19% more cruciferous vegetables, 12% more broccoli and 14% more leafy greens than men[5].

Meat, especially red meat, is known to cause inflammation in the body, and can also be high in saturated fats that can contribute to cardiovascular problems. So a few extra portions and a few less veggies is another contributing factor!

Why could women be more prone to heart disease later in life?

The reason that women tend to develop heart disease later on in life can be explained by the hormonal changes women experience as they grow older.

It’s thought that oestrogen can help to protect against heart disease and as women approach the menopause, their oestrogen levels begin to drop. After the menopause, these levels remain very low, leaving women more vulnerable to the development of heart disease and other health problems. In fact, research suggests that women who experience an early menopause have a two year lower life expectancy than those who experience a normal or late menopause[6].

This is because oestrogen has been linked to higher levels of good cholesterol and lower levels of bad cholesterol, and we know that cholesterol plays a big role in the development of cardiovascular disease. Oestrogen is also important for keeping blood pressure balanced, so as this decreases with age, many women experience changes to their blood pressure.

On the other side of this, hormone dysfunction such as PCOS is often associated with an increased risk of atherosclerosis and chronic heart disease, and this can cause problems at any age.

It’s important to remember that just because men are more prone to heart disease, that doesn’t mean you are destined to develop one, or that women can’t develop one! An overweight woman who smokes and eats poorly is much more likely to develop heart problems than a man who eats well and exercises regularly.

Diet is probably one of the most important factors, so make sure to eat plenty of the following:

Be cautious when consuming meat and dairy, as these can be very high in cholesterol and saturated fat, which can contribute to poor heart health.

Getting started with a healthier diet can feel a bit intimidating, but you’ll find lots of healthy recipe ideas in our recipe section. And remember that healthy food doesn’t have to be boring! Try out this Sweet Chilli Stir Fry or Three Bean Curry for something tasty, nutritious and filling to get you started. 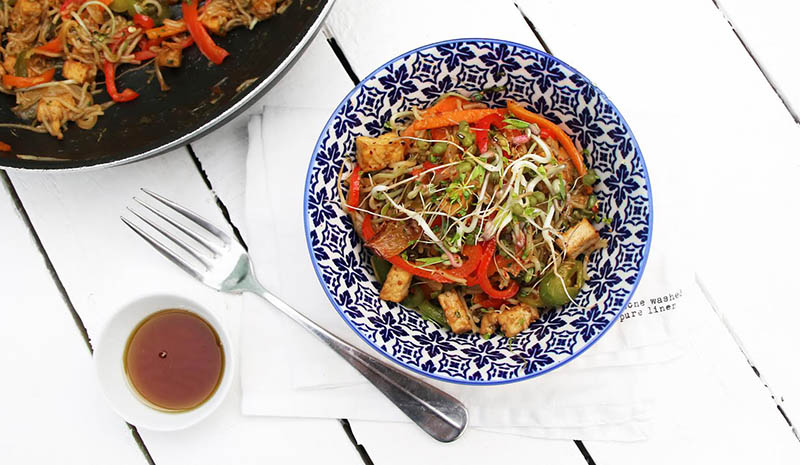 Try to keep stress to a minimum. I know – easier said than done! Practise relaxation and breathing techniques to help calm you down when you get stressed. If you commute to and from work, the drive can be a good time to practise slow, deep breathing. Try to avoid loud music as this sensory overload can stress you out, even if you don’t realise it!

You can also squeeze deep breathing and relaxation in at other times of the day – on your lunch break, while you’re pairing socks, while you’re watching TV or while in the bath or shower, for example.

Read this article on breathing tips to relieve stress for more information.

Exercise helps to keep your heart and circulatory system in good condition, and also helps to prevent obesity which is a major risk factor for heart disease.

If you have a sedentary job or lifestyle, you should also make an effort to get up and move about every hour or so. Sitting down for too long can slow down blood flow and increase the risk of developing clots and other venous problems like varicose veins. Even doing simple leg exercises at your desk can help to keep blood moving.

Exercise can also help to reduce stress by burning off the adrenaline produced during stress, and also boosting natural feel-good hormones.

However, if you know you have a heart condition it’s important to discuss your new exercise routine with your GP.

Unfortunately there are no magic cures that will provide a guaranteed prevention for heart disease! However, there are a number of useful remedies that you can take alongside a healthy diet and lifestyle to give your cardiovascular system a bit of extra support.

Artichoke contains a substance called cynarin which can help to promote the production of bile. This bile is important for digestion, but it can also help to reduce cholesterol levels. You can read more about artichoke and cholesterol here. 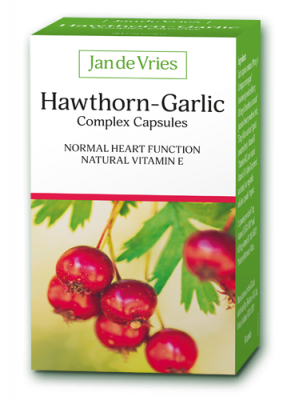 Hawthorn is also traditionally used to promote heart health and it can be found in our Jan de Vries Hawthorn-Garlic Complex Capsules alongside garlic (as the name suggests!) as well as vitamin B1 and vitamin E. Together, these can help to support heart function and cardiovascular health.

2] Leslie Cho, MD, ‘Women or Men — Who Has a Higher Risk of Heart Attack?’, Cleveland Clinic

Hawthorn-Garlic has traditionally been used to support heart function, blood pressure and circulation. It is also high in antioxidants to help fight signs of oxidative stress.

To find stores in your area that sell Jan de Vries Hawthorn-Garlic Complex Capsules, simply enter your postcode below.

Heart problems
11 risk factors for heart-related problemsAre men more prone to heart disease?High cholesterol - what is it and how to manage itHow to keep the heart healthy

UTIs
Can an enlarged prostate cause UTIs?

Other
3 health problems men are more prone to4 key signs of low testosterone5 surprising men’s health statistics8 common reasons for night sweats in menAre men less likely to visit their GP than women?Are men more at risk of infections?Can lack of testosterone make you tired?Does every man go through a midlife crisis?Does vitamin D affect testosterone levels?Frequent toilet trips - causes and treatments for menHow can men benefit from mindfulness?How does sleep differ for men?How does stress affect male health?Is your masculinity preventing good sleep?Is there a male menopause?Osteoporosis in men - causes and treatmentsTop tips for good male healthWhat are the health benefits of magnesium for men?What causes lack of energy in men?What is irritable male syndrome?