The 7 best foods to help constipation

Find out the best food picks to help tackle constipation

Diet is a very important factor to consider when trying to relieve symptoms of constipation. What we consume can have a significant impact on our digestive system, with foods such as green vegetables and brown rice containing the necessary fibre and nutrients to promote healthy digestion. Here, I take a look at the food products that can improve our digestion and recommend some complementary herbal remedies.

The role of diet in constipation

Constipation is a common problem. Factors such as stress and changes in lifestyle (eg. moving house, travelling abroad) can play a big role in causing the problem. For unknown reasons, women tend to suffer more than men.

We also know that diet is an important influence and refined, processed foods commonly found in developed countries, contribute hugely to the condition.

On the other hand, there are some foods which can help if you are constipated. To relieve constipation it is necessary to have a soft and bulky stool. This can be achieved by eating foods that are high in healthy fibre and promote the proliferation of friendly bacteria, as well as by drinking plenty of water.

Before we delve properly into the different foods that can help, it’s important to understand that drinking plenty of water is one of the most fundamental things you must be sure to do when attempting to tackle constipation. Adequate water intake helps to prevent stools from becoming too hard, dry and difficult to pass – important if you are prone to constipation. A soft, bulky stool will press on the bowel wall and send a clear signal to trigger a bowel movement.

It is best to drink water (and other drinks) at least 20 minutes away from meals, to avoid diluting our all-important digestive juices.

Now, back to the foods, my 7 top food picks for helping constipation are as follows:

Green vegetables are most easily digested when cooked rather than eaten raw and are among one of the food groups you should be considering if you’re struggling with a slow moving bowel. Go big on broccoli, kale, spinach, cabbage, leeks, broad beans, runner beans and courgettes. They’re all packed with a good dose of fibre to help get things moving along.

Dried fruit can be especially effective if soaked in water overnight and then heated up, or simmered in a little water for 5 minutes before eating. Examples of food dried fruit options include prunes, figs, sultanas, mango, pineapple and dates.

Prune juice is well known for being helpful for those suffering constipation, especially in children with a sluggish bowel. You can get good quality, ready-made juices easily from your local healthstore such as Biotta’s particularly tasty variety! However, soaking dried fruit and straining off the water to drink later, as well as eating the fruit itself, is also effective and tasty.

Wholegrains, in their ‘as nature intended form’ are far easier for the gut to process than refined grains (eg. white flour, white pasta, white pastry) so use wholegrain bread and pasta and wholegrain flour for cooking (eg. pastry dishes). Try replacing some wheat-based products with millet or quinoa to reduce the ‘gluey’ effect of gluten in your gut.

Much like other wholegrains, brown rice is similarly a better option for managing constipation when compared to white rice. Cook it thoroughly and you will find it far more filling and satisfying than bland white rice.

Linseeds, otherwise known as flaxseeds are also a top pick to help relieve constipation. Although the seeds appear dry and hard, they have a fine coating of a substance called mucilage which, when in contact with water, swells and increases in bulk. To get the best effect, take them with plenty of liquids.

Linoforce Granules 12 years plus: A traditional herbal medicinal product for use in the short term relief of occasional constipation exclusively based upon long-standing use as traditional remedy. Always read the leaflet.

Find Linoforce granules 70g in pharmacy near you Buy from Express Chemist - 70g for £9.99

Beetroots are another, lesser known option for helping to relieve symptoms of constipation. This humble root veg is another good source of fibre, effectively helping to regulate your bowel movements, but also containing a high level of vitamin B9 which helps with tissue repair, including tissue throughout the digestive system. Beets are also a surprisingly versatile ingredient, so easy to incorporate into your diet with a splash of colour!

The importance of friendly bacteria for tackling constipation

It is now very clear that the state of our gut bacteria (also known as gut flora, microflora or microbiome) plays a very important role in the way our digestive system functions. It is said that a wide variety of digestive complaints ranging from indigestion, irritable bowel syndrome (IBS) to constipation are influenced by the state of our gut bacteria. 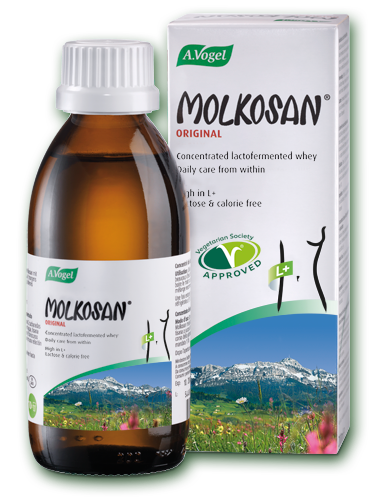 Certain foods can help by encouraging good gut bacteria. These are known as  ‘prebiotics’ and tend to contain a type of soluble fibre called inulin. Examples of prebiotic foods include jerusalem artichokes, onions, asparagus, chicory and garlic, and bananas.

In addition, foods that contain high levels of a naturally occurring substance known as L+ lactic acid have been shown to be distinctly prebiotic, helping good gut bacteria.

A.Vogel’s Molkosan is a concentrated whey drink which is rich in L+ lactic acid. Use diluted in a glass of mineral water once or twice daily.

Where to buy Linoforce granules locally

Need help to relieve your constipation?
To find pharmacies in your area that sell Linoforce granules 12 years plus, simply type your postcode below.

Treatment
An introduction to constipation reliefDietExercise

What is the best way to relieve constipation?

What should I eat to avoid constipation?

What you drink is actually equally important – dehydration is a prime contributor to constipation ...
Read more >

A traditional herbal medicinal product for use in the short term relief of occasional constipation exclusively based upon long-standing use as traditional remedy.

Constipation is one of the most common digestive complaints. An estimated 25% of people in the developed world suffer from it. Inactivity a common cause, so it’s time to get moving more!