home > health > hayfever > why hayfever symptoms can get worse at night

Why hayfever symptoms can get worse at night

Do your symptoms flare up when the sun goes away?

Most people associate severe hayfever symptoms with hot, sunny days, and assume they are safe when the sun goes away. In actual fact, though, it is quite common to find that symptoms get worse at night. Find out why this happens and what you can do in today's blog.

Can hayfever worsen at night?

After struggling through a day of hayfever symptoms, you decide to treat yourself to a night out – after all, it's night time so your symptoms are likely to calm down, right? Well, you might actually be wrong!

Many people report that their symptoms are actually worse at night, whether they're out for dinner, on a night out, or just trying to get some sleep, but why should this be the case?

Find out more about these issues and how you can address hayfever symptoms at night here.

1. Pollen levels can still be high in the evening

Although you may not realise it, pollen levels often peak at night. During the day, pollen rises with the warm air and, as night falls and the air begins to cool, all this pollen sinks back down to ground level. Some plants also release their pollen in the evening, adding to the high pollen levels in the air.

These effects can be seen in a study conducted by Danish scientists.1 Here, researchers assessed pollen levels throughout the day at (a) early season, (b) mid-season and (c) late season and found that, in early and mid-season, pollen was particularly high in the early evening and at night.

Other studies have had similar conclusions. A 2016 piece, for example, concluded that the amount of grass and tree pollen recorded at night was similar to daytime values. Researchers also concluded that smaller pollen particles, such as ragweed, were more likely to cause problems at night.

Both studies confirm we are wrong to assume that, just because the sun has gone away, we are safe from pollen!

2. Pollen can get trapped indoors

Pollen can easily get trapped indoors meaning you can experience more severe hayfever symptoms at night, even if the pollen count is not high. This could explain why some people experience their worst symptoms early in the morning - it's simply because they have spent a night sleeping in a pollen-laden bedroom.

So, how does pollen get indoors in the first place? Well, pollen easily gets stuck to our clothing, skin and hair, as well as on any pets that have been outside. If you change your clothes in your bedroom, go to sleep without washing your hair or let pets sleep on your bed, pollen can then be transferred to the area in which you sleep.

If you find your hayfever is worse at night, it is a good idea to check your diet as what you eat in the evening could be to blame.

Now, it is not uncommon to sit in front of television at night with a bar of chocolate but, as this contains the chemical histamine, it is likely to make hayfever worse. After all, histamine is produced by the body in response to pollen and this is what triggers symptoms like a runny nose or irritated eyes.

Finally, preserved foods also contain histamine so, if you are planning on having the likes of sauerkraut, vinegar or yogurt with your dinner, it may be best to do this outside the hayfever season! 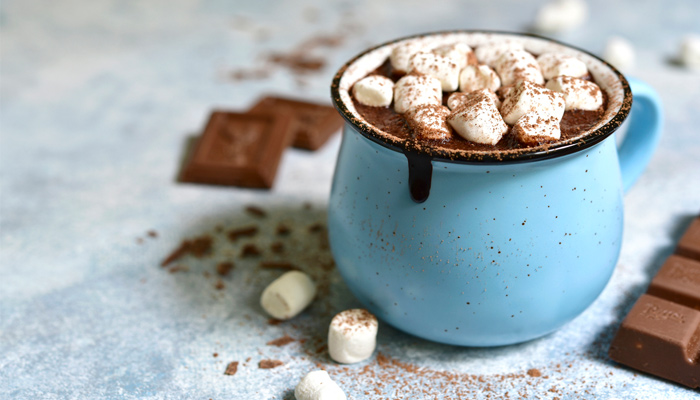 4. Your evening drink can exacerbate symptoms

If you're out and about in the evening, it is important to be aware that what you drink could affect your hayfever symptoms. Alcohol, for example, is a rich source of histamine which can trigger a more severe hayfever reaction, essentially counteracting the anti-histamine tablets you may be taking! It is also inflammatory in nature so is likely to make hayfever symptoms like a blocked nose and sore throat more problematic.

It's not just alcohol that you should be wary of, though. Sweetened drinks like fizzy juice can act against adrenaline which the body produces to subdue the effects of histamine. So, if you've had a few sugary drinks in the evening, you may find that your hayfever symptoms become noticeable as a result.

A cup of tea or coffee in the evening may also be one to avoid during the hayfever season as caffeine contains histamine.

You can read more about food and drinks that can make hayfever symptoms worse here.

If you are prone to nasal symptoms like congestion during hayfever season, then you may find it gets worse at night because of your sleeping position. You see, the nose cannot drain so effectively when you are lying down, meaning that blocked nose feeling will probably become more noticeable.

I'd recommend propping your head up with an extra pillow to avoid this problem. This is one of a number of simple tips that will help to relieve hayfever at night. 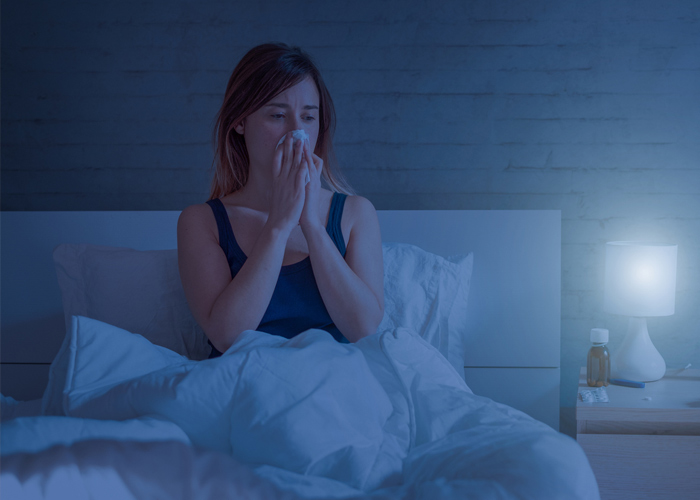 What can I do to relieve hayfever at night?

If you are able to identify what's causing your night-time symptoms, this can be helpful in figuring out what to do about them. Consider whether your symptoms are caused by pollen in your home, your evening eating and drinking habits, or perhaps just a high pollen count.

During the hayfever season, there is no reason to halt your usual routine. Instead, keep doing your regular activities and, to help keep symptoms at bay, simply arm yourself with a nasal spray and eye drops when you're out and about. You may also find it useful to use these just before bed to help control your symptoms at night.

Lining your nostrils with coconut oil or a natural lip balm, whether you're out and about or in bed, will also help to reduce the amount of pollen you're breathing in.

In addition, if you're taking one-a-day hayfever tablets, you could adjust the time you take them at. If you know when your hayfever symptoms usually peak, try to take your tablet a couple of hours before then. Most people take theirs in the morning but, if your symptoms are worst at night, you might be better taking them with dinner.

Better still, opt for tablets that can be taken twice daily as this will keep you topped up all day and night. Our own Pollinosan tablets should be taken three times daily, meaning that the levels of these hayfever-fighting herbs stay constant in your body, all day and night.

Keeping your windows closed at night will help to keep pollen out of the bedroom. I know it can be hot during the summer months when pollen is rife, so follow our 7 tips to keep cool at night so you don't need to open a window.

To avoid spreading pollen throughout the house, make sure to take off your outer layers of clothes (such as jackets or jumpers) before heading indoors. As soon as you come in, get changed into clean clothes in the bathroom and pop your pollen-laden clothes in the wash or in a plastic bag to wash later.

Taking a quick shower and washing your hair as early as possible will help to prevent the spread of pollen around your home. If you don't want to shower as soon as you get in, at least make sure to do so before you go to bed, or you'll cover your pillow and bed sheets in pollen which you'll then breathe in all night!

Look at your diet

As I outline above, diet can have a huge influence over hayfever symptoms at night. Therefore, you may find it helpful to reduce your intake of some of the problematic items listed above. In their place, you could opt for the following:

Looking for relief of red and itchy eyes due to hayfever?

A.Vogel Pollinosan Hayfever Eye Drops contain hyaluronic acid (from vegetable source) and can be used for quick relief of red and itchy eyes due to hayfever. Suitable for contact lense users.

To find local independent stores in your area that sell A.Vogel Pollinosan Hayfever Eye drops, simply type your postcode below.

For quick relief of red and itchy eyes due to hayfever.
More info