home > health > hayfever / Can you get hayfever all year round?

Can you get hayfever all year round?

Sometimes it feels as though hayfever symptoms are never ending and, whilst this may be a slight exaggeration of the truth, it is not uncommon for hayfever to occur throughout the year. By taking a look at each season in turn, in this blog I explain why this is the case

Do you ever find yourself sniffing and sneezing into the winter months? Well, this could be a sign of a cold or flu but, equally, there may be reason to suggest that hayfever is to blame.

If the winter months turn out to be particularly mild then conditions are ideal for bulbs and trees to develop quickly. This is likely to cause symptoms much earlier than normal, usually around February/March time.

In the past it may be the case that you reacted to one particular type of pollen, however, it is common for sensitivities to broaden. As a result, you may now react to different types of pollen and, since different varieties develop at different times, this could trigger symptoms earlier than usual.

If you live in a polluted area, even a small amount of pollen can do damage. That’s because pollution mixes with pollen to make it stronger.  If you live in a town or city this could explain the onset of hayfever symptoms in the earlier months of the year.

On occasion you may experience hayfever-like symptoms in winter that are actually a sign of something else entirely. After all, plants do not pollinate in the colder months so, with the exception of the issues just discussed, the chances of plants being the underlying problem are slim.

As a hayfever sufferer, you have more chance of developing additional allergies so this may be the underlying problem. Spending more time indoors during winter also means we are more exposed to allergens such as dust mites, animal dander and mould spores. These can cause symptoms such as a blocked nose and itchy skin which are easily confused with signs of hayfever. 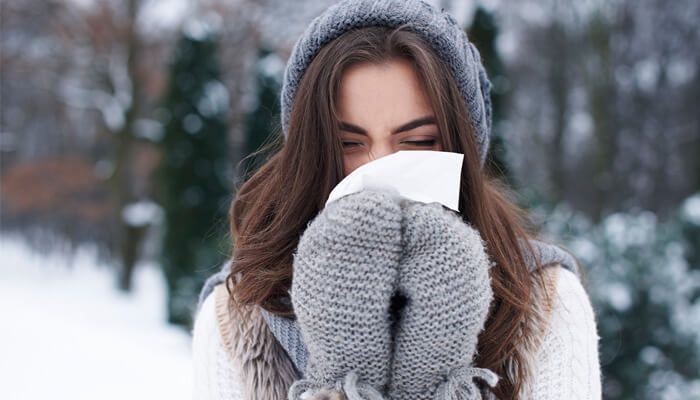 When the temperatures become increasingly mild and the sun begins to show its face, hayfever symptoms are most likely to develop.

In the spring and summer months, pollen is released by plants as part of the fertilisation process. Grass pollination usually occurs from mid-May to July, tree pollination is March to mid-May and weed pollination is June to October.

As plant fertilization continues into June and July, we can see why one may experience hayfever symptoms into the summer months. There are a few things, however, that can contribute to more severe symptoms at this time.

The UK does occasionally experience a rapid rise in temperatures which can cause troublesome hayfever symptoms. In this kind of weather pollen takes on water which causes it to swell and, eventually, burst. At this point lots of mini pollen particles are released into the air and can wreak havoc on our nose, throat and eyes!

Humidity during summer thunderstorms can also cause pollen grains to burst open. As a result, many little pollen grains are dispersed into the air and then easily breathed in.

Autumn signifies the end of the hayfever season, right? Well, unfortunately, that’s not entirely the case…

Pollution creates smog that prevents pollen from rising to the upper atmosphere. This means it sticks around much longer than it normally would, so hayfever symptoms can persist out-with the pollination period.

A very cold winter can cause plants and trees to pollinate much later than normal. As the whole process is delayed, hayfever symptoms can occur later in the year.