home > health > pms > is pms putting you at risk of anaemia

Is PMS putting you at risk of anaemia?

Some common signs of iron deficiency to look out for!

Everyone complains of feeling tired once in a while, but if fatigue is a recurrent problem, could anaemia be at the root of the cause? Heavy periods as a result of PMS or peri-menopause could be putting you at risk. Here I explain what symptoms to look out for, some of the things the doctor won’t tell you when it comes to anaemia and of course, how to tackle the problem head on!

Iron deficiency anaemia, or known as anaemia for short, is caused by a lack of iron. Iron is an important component of haemoglobin – the unique component of our red blood cells which allows us to transport oxygen around our body. Without enough iron, we risk lacking in healthy red blood cells saturated in oxygen, and unsurprisingly we can be left feeling lethargic and lacking in energy as a result.

Anaemia is more common in women than men, and common causes can include pregnancy (when we use up more iron stores), or as a result of heavy periods. When it comes to heavy, monthly periods we lose more of our stores and risk not being able keep up with the blood loss each month.

Iron deficiency anaemia can gradually become worse as your body attempts to make up for the lost red blood cells by desperately using up your iron stores to make more haemoglobin, and your stores can quickly become drained. Heavy or frequent periods as a result of PMS, peri-menopause or conditions such as endometriosis or fibroids, may make this condition more likely.

Anaemia is quite often suspected if someone complains of feeling tired all of the time, which isn’t necessarily a bad thing. However, some important points that you should be aware of when it comes to anaemia, are as follows:

Men are much less likely to have anaemia

Iron is often seen as a universal supplement for those struggling with fatigue or tiredness, when in fact this isn’t the case. Women are more likely to be low in iron, however men, or even women who haven’t had their levels checked shouldn’t take this mineral unnecessarily. If we don’t bleed (or bleed enough) we can struggle to excrete iron, so if your stocking up on extra stores and not losing any, this can then build up in our bodies and put pressure on our liver as it struggles to process or eliminate the excess.

Your doctor will most likely check your haemoglobin levels initially if they suspect you could be anaemic, and yes, this can certainly be a good indicator of anaemia (as this gives us an idea of the quantity of iron circulating in your body). However, for an even better gauge of what’s going on, we would preferably want to look at your ferritin levels. This is your storage form of iron, and if these levels are depleted then it really suggests that you need some extra support.

Prescribed iron may not be the best option

Although if you’re anaemic iron supplements are a sensible choice, prescribed iron tablets aren’t always the best option. Cheaper forms of iron such as ferrous sulphate may contribute to digestive upset such as constipation and we know that this can contribute to uncomfortable symptoms and potentially put pressure on your liver.

Some of the main causes of anaemia aren’t ‘normal’!

Unfortunately nowadays, it’s far too ‘normal’ to be bleeding heavily as a result of our periods! We often hear of women going to the doctor and being told that what they are experiencing is ‘normal’ and just a part of being female. However, although we know that heavy bleeding is often quite common in certain stages of a woman’s life, for example as a result of PMS, or peri-menopause, we actually need to do something about it as ultimately it can make us anaemic and quite poorly! Initially, if the bleeding is very heavy and showing no signs of tailing off, then it’s likely that you need some short-term hormonal intervention from the doctor to help get things under control. In the long-term, a good quality iron tonic and some Agnus castus may be a suitable solution for you.

I’ll touch on this a little later too, but anaemia isn’t necessarily always linked to blood loss (although it is usually the main contributing factor). However, digestive issues can also have an impact. We may be struggling to absorb iron from our diets and replenish our stores as a result of digestive conditions. Firstly, we need good, strong stomach acid to absorb iron sufficiently (many of us are severely lacking), but conditions such as coeliac’s disease (especially if they go undiagnosed) may also be having an impact, and affect how we absorb nutrients from our food. In extreme cases, black tarry stools could also suggest that you are losing blood from the inside, which of course could be contributing to anaemia, so if this is the case, you should see your doctor immediately.

What are some of the common symptoms to watch out for?

If you suspect you could be anaemic, some of the common symptoms to look out for are as follows:

Many of these symptoms may be related to anaemia or something else so it’s time to go to the doctor for a formal diagnosis if you’re ticking some of those boxes. Also, if you experience any of the symptoms in the second list you should visit your doctor sooner rather than later for a check up.

What can you do at home to help protect against it?

If you’ve been told you have anaemia, some simple steps at home can help you to manage the condition:

Stock up on iron rich foods

As well as your good quality red meat (which we don’t recommend you eat too often), there are also some lovely plant-based sources of iron out there worth considering. Stock up on your green, leafy veg, pulses, beans, brown rice, dried fruit and some good quality, earthy Biotta Beetroot Juice in order to up your daily intake.

As mentioned, it’s really important to look after your digestive system in order to maximise your absorption of iron. Firstly, we need sufficient stomach acid, so if you feel you need some extra support why not employ some herbal bitters such as

Yarrow. Take them 5-10 minutes before meals, in a small splash of water, up to 3 times daily.

Watch your consumption of tea

Components of tea called tannins may also affect the absorption of iron from your meals. Our advice is to avoid drinks with your meals anyways, but especially if your drink of choice is a cuppa. Separate your drinks from meals and couple iron- rich foods with vitamin C counterparts instead, which have been shown to support absortion1.

Finally, if you’ve recently discovered you’re anaemic, it’s sensible to support yourself with some supplements too; my top picks are as follows: 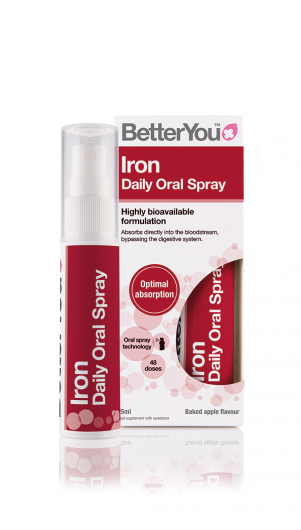 Firstly, unsurprisingly an iron supplement is top of my list if you’re anaemic. BetterYou provide a liquid iron supplement for optimal absorption but also in a handy spray form. This supplement contains a moderate 5mg dose (slow and steady wins the race), and a tasty baked apple flavour to take away from the typical metallic is an added bonus in my eyes!

If heavy periods are at the root of the cause, then of course, it makes sense to tackle this issue head on. Agnus castus helps to gently support your progesterone levels which can help to dampen typical oestrogen dominant symptoms, which can often give rise to heavier, more painful periods

If you’ve supported yourself with some extra iron, but still feel you need something a little extra, Balance Mineral Drink could be the one for you! This tasty supplement contains a number of other essential vitamins and minerals we need to feel and look our best, including magnesium, zinc and vitamin D.

Treatment
An introduction to PMS treatmentRemediesDietLifestyle

What is PMS?Take the PMS quiz

Explore more from our PMS advisor Emma Thornton
9 essential oils for PMS symptomsDoes winter make PMS worse?Is it normal to still have PMS whilst on the pill?PMS or PMDD - how to know the differencePMS and hayfever - are the two connected?Could going meat-free help symptoms of PMS?5 foods to avoid during your period9 side effects of the birth control pill and how to overcome themDon't cave to the PMS crave!Which PMS type are you?Is PMS leaving you feeling down in the dumps?Agnus castus - the female herb explainedCan alcohol cause PMS?Get back your stolen weekPMS as a predictor of menopause symptomsGetting the better of PMSIs PMS putting you at risk of anaemia?PMS vs pregnancy symptomsPMS through the ages: what to expect and how to prepareHow many days will my PMS symptoms last?How to beat monthly fatigueWhen not to use Agnus castus

PMS is a combination of any of around 150 recognised symptoms experienced in the run up to a ...
Read more >

What can I do to minimise PMS?

The good news is that almost anything you do to improve your diet, lifestyle or general health will ...
Read more >

I am experiencing period pains but nothing else. Could I be pregnant?

If your period is late then the best thing to do would be to take a pregnancy test. However, stress ...
Read more >

As the A.Vogel Women's Health advisor, I recommend Agnus castus to help relieve symptoms such as menstrual cramps, breast tenderness and irritability.

Did you know period pain occurs when the muscles in your uterus contract
and they can contract strongly enough to deliver a baby! Ouch!