There are a variety of different things that can cause allergic rhinitis including animal matter and mould spores. However, in this blog our hayfever advisor Louise Baillie discusses why pollen causes this condition. There are also some details about what treatments are available to address allergic rhinitis.

Allergic rhinitis is caused by the immune system which reacts to things like pollen, an allergen, as if it were dangerous. Reactions don’t usually occur on the first encounter with an allergen however, in a process known as sensitisation, the immune system begins to recognise and memorise it in order to fight it off next time.

Hayfever is described as seasonal rhinitis as it fluctuates in severity depending on the time of year. It usually gets worse in the spring and summer months for example, when pollen is released by plants in a process called fertilisation. However, unfortunately that’s not to say you won’t be affected by hayfever in January or October – it can become problematic at any time, depending on pollen count.

In order to fight off allergens, antibodies, which are special proteins in the blood, are produced. These are normally reserved for dealing with viruses and infections however, in people with allergic rhinitis, the body’s sensitivity to pollen means they are used here too. Antibodies release different chemicals, including histamine, which causes the main symptoms of allergic rhinitis. The mucous membranes inside the nose for example, can become swollen thus leading to congestion. Excess mucus also starts to be produced which results in a runny nose and sneezing. However, as any hayfever sufferer knows, these are not the only symptoms of the condition!

When lots of histamine is produced by the body, this can cause inflammation, skin irritation, swelling and itching. Plus, as a result of pollen, the eyes can become itchy, red or watery thus affecting vision. Also, some people may find that these symptoms have a further, negative impact on the body. It can affect your ability to sleep for example, thus increasing tiredness. The severity of allergic rhinitis symptoms vary from person to person though, and an issue that arises in one person might not be a problem for another.

As mentioned, grass, trees and weeds all release pollen which can then lead to the symptoms of allergic rhinitis. You’ll usually find that the problem worsens on windy days when pollen is carried through the air however, dry and humid conditions can also cause issues. On the other hand, cold, rainy days tend to ease hayfever symptoms as the rain washes pollen away.

Trees – although all trees produce pollen, in the UK there are a few that are particularly problematic such as elm, birch, hazel, horse chestnut and alder. These pollinate between March and May and so this is when you may find your symptoms worsen.

Grasses – this is the most common cause of hayfever with symptoms at their worst between May and July when again, pollination is under way.

Weeds – there are some weeds you’ll be aware of such as nettles, daisies and docks which can cause hayfever. However, the less familiar type such as plantains and mugwort can also produce troublesome pollen.

Fortunately, if pollen brings out symptoms of allergic rhinitis there are a few simple things you can do to improve the situation.

Dry clothes inside - avoid drying clothes outside when count is high as pollen can stick to the fabric and then exacerbate symptoms.

Invest in a dehumidifier – certain dehumidifiers reduce humidity levels and filter air to help reduce the presence of pollen around you.

Leave windows shut – during periods of high pollen count, it perhaps goes without saying that you should keep your windows shut as this will prevent pollen from drifting indoors. If you feel the need to circulate some fresh air, open your windows in the evening when pollen count is likely to be lower.

Prevent the spread of pollen – when counts are high, make sure you shower, wash and change your clothes when you return home as this will prevent pollen from spreading throughout your house.

Take shoes off when returning indoors – pollen can stick to the soles of your shoes whilst you’re out and about so take them off before you return indoors to help prevent the spread of pollen.

Use a damp cloth when dusting – a normal duster tends to push dust around rather than gather it up so, to avoid this, use a damp cloth.  This will gather up any particles of pollen that may be lying about, as well as dust which can make hayfever symptoms worse.

View pollen forecasts – we provide a detailed and comprehensive pollen forecast for your local area, covering small towns and big cities too. Keeping an eye on pollen count will help you to plan your day around hayfever.

Wash sheets regularly – this will help to get rid of any pollen that may have become attached to the fabric.

When allergic rhinitis is a problem, there are a few things you can try to help ease symptoms.

Antihistamines – these can be obtained from a doctor or pharmacist and help to block the release of histamine which causes many of the symptoms associated with allergic rhinitis.

Eye drops – eye problems can be frustrating and uncomfortable however, our eye drops, which contain Euphrasia, can help to relieve symptoms like watery eyes, irritation and itchiness. 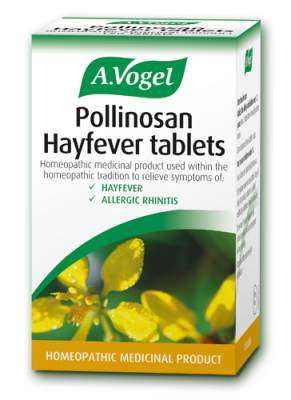 Pollinosan hayfever tablets – these address many of the physical problems of allergic rhinitis such as inflammation, congestion and watery eyes. They are made from seven tropical herbs and can be used alongside other hayfever medications should you already be using them. To be prepared for hayfever season, it’s advisable to start taking these tablets before spring comes around.

Visit your doctor - if allergic rhinitis is affecting your ability to go about your day-to-day life, if it’s disrupting your sleep, or if it’s reducing the quality of your work professionally or at school, it is time to visit your doctor. They’ll be able to discuss the treatment options open to you and come up with some helpful solutions to the problem.