Find out the differences and similarities

Suffering from symptoms like a blocked nose but unsure of the exact cause? To help you work out what the problem could be, in this blog I take a look at both allergic rhinitis and sinusitis and explain the similarities and differences between the two.

What’s the difference between sinusitis and allergic rhinitis?

There is significant overlap between sinusitis and allergic rhinitis so, to help you distinguish between each one, this blog covers:

What is allergic rhinitis?

Allergic rhinitis occurs when the immune system overreacts to allergens like pollen or animal dander.

A chemical called histamine is released which can lead to an array of symptoms like itchy eyes, a sore throat and a runny nose. It also prompts the mucous membranes to produce more mucus in order to trap and wash out allergens. In addition, the presence of histamine causes the body to increase blood flow to certain areas of the skin, thus promoting inflammation.

If you breathe allergens in, it can also cause the sinuses to become inflamed and painful.

Key features of allergic rhinitis include:

Sinusitis occurs when the sinuses become swollen, usually as the result of a viral or bacterial infection. Swelling causes mucus and pressure to build, thus preventing mucus from being drained properly. This can cause a blocked nose, as well as other symptoms including headaches and fever.

There are two pairs of sinuses, both of which can become infected. This can be a recurrent or temporary issue - as the result of a cold or flu, for example, or an allergy.

Key features of sinusitis include: 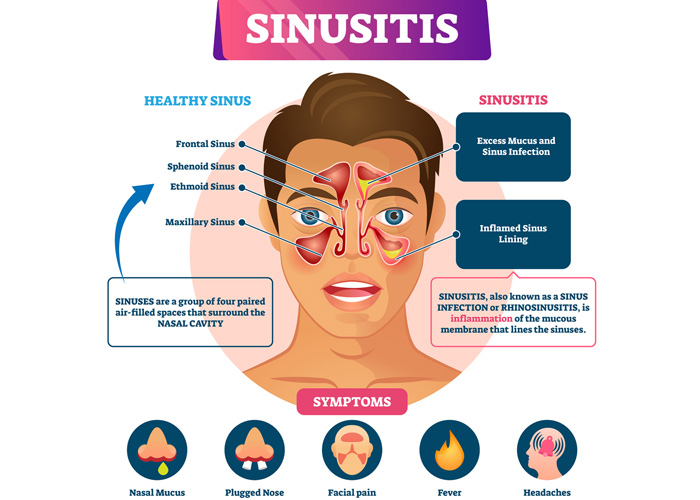 Sinusitis and allergic rhinitis have a few things in common so it can be difficult to distinguish which you may be suffering from. Here, I have outlined the similarities and differences to make this slightly clearer.

Can allergies cause sinusitis?

In some cases, allergies can trigger a sinus infection. This is because the body's reaction to an allergen can cause the sinuses to swell, thus meaning bacteria or pathogens become trapped and trigger an infection.

Who’s most a risk?

Menopausal women can be more at risk of allergies and sinusitis as they tend to have thinner, drier mucous membranes.

Pollution is also known to make allergic rhinitis more likely and more severe. This means city-dwellers, who are exposed to more pollutants and irritants, could be more likely to experience both problems.

Other than this, anyone with high histamine production or a history of respiratory tract infections are at risk of allergic rhinitis and sinusitis symptoms.

You could try our Sinuforce Nasal Spray if suffering from nasal congestion and catarrh. This contains menthol which may reduce swelling in the mucous membranes to ease discomfort.

Find Sinuforce Nasal Spray in a store near you Add to basket - 20ml for £7.95

There is some overlap in terms of treatments for these conditions, as well as a few distinct differences.

If concerned about either of these issues, ask your doctor for advice. It is important you don't self-diagnose so you can find the most effective treatment as quickly as possible.

You should also see a doctor if symptoms haven't improved after a week, if symptoms get worse or if medications/treatments don't work.

Results: Do your allergies cause a blocked nose?

Looking for a treatment to help relief the symptoms of sinusitis such as nasal congestion and catarrh?

“This really helped my husband when he was dealing with blocked sinus problem which nothing else had fixed. His sinus problem was cleared in a couple of days after using the product.” Linda Buckham, Eastbourne

To find local independent stores in your area that sell Sinuforce Nasal Spray, simply type your postcode below.

Our customers love us!

We are proud of the high standard of customer service we deliver and our customers love us so much they give our service a 96% rating. That’s pretty good!

Read some of our customer ratings