How long does allergic rhinitis last?

Struggling with symptoms like a blocked nose and sneezing? Wondering how much longer these problems could possibly last? I give the answers in today’s blog so read on to find out more about this, as well as some other common questions relating to allergic rhinitis.

How long does allergic rhinitis last?

The length of time for which allergic rhinitis symptoms persist will depend on the allergen levels in the surrounding air.

For those who are allergic to pollen, symptoms are most likely to develop when plants pollinate. This is widely known as the hayfever season and usually runs from March till October; though this can vary depending on factors like pollution and weather.

The symptoms for those who are allergic to animal dander, mould spores and dust mites will also vary in severity depending on the levels in the air. As long as mould problem persists, for example, or an animal lives in a home where no measures have been take to minimise the risk of dander, the likes of congestion, itchy eyes and sneezing will continue.

What is the most common cause of rhinitis?

According to NHS inform, hayfever will affect up to 1 in 5 people at some point in their life.1 This makes pollen one of the most common causes of allergic rhinitis symptoms.

Another common trigger of allergy symptoms is animal dander. This refers to the urine, saliva and dead skin cells of pets, rather than their fur, as is commonly believed. There is a lack of research to show exactly how many people suffer from this kind of allergy, though we know from anecdotal evidence that it is a very common problem.

Mould spores and dust mites also frequently cause symptoms. These tend to gravitate towards clean, warm areas around the home including bedding and carpets, whilst mould thrives in warm, damp areas.

Some people may also find they are allergic to substances in their working environment such as wood dust and latex. 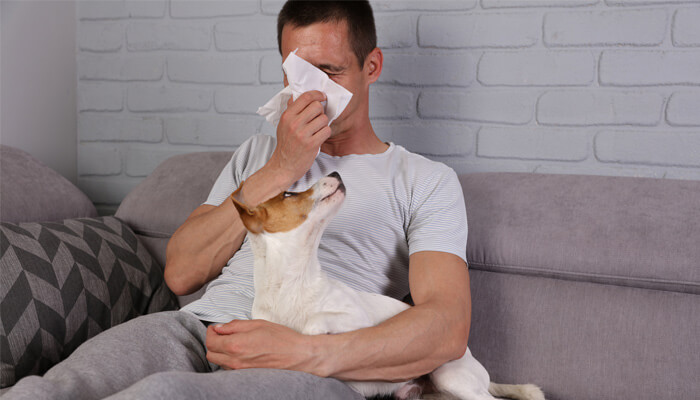 In the majority of allergic rhinitis cases, steps can be taken to either limit exposure to allergens, or to reduce the severity of symptoms. There is no specific cure for the problem though a minority of people with very severe and persistent symptoms may be eligible for immunotherapy, provided all other attempts to solve the problem have failed.

Immunotherapy involves taking small doses of an allergen, either via tablet, injection or as drops, under the supervision of a doctor or specialised clinic. The aim of this is to expose the body to the allergen so that it eventually gets used to it and symptoms ease.

The NHS states that immunotherapy doesn’t always cure symptoms completely, though, and is more often used as a means to make symptoms more manageable.2

How can I get rid of rhinitis?

Although there is no effective cure for rhinitis, a number of natural treatments and simple lifestyle changes can help to alleviate symptoms.

Herbal remedies such as Pollinosan Tablets can bring relief from a variety of symptoms without causing unwanted side effect like drowsiness. This is often the case with conventional allergy treatments such as antihistamines.

Our Pollinosan Tablets can bring relief from symptoms of hayfever and allergic rhinitis such as watery eyes, sneezing and a blocked nose. The tablets can be used alongside antihistamines and have no unwanted side effects such as drowsiness.

"Always effective I use this every summer. No side effects."

Find Pollinosan Hayfever tablets in a store near you Add to basket - 120 tablets for £10.85

Natural eye drops and even a gentle nasal spray can also be effective in easing irritation and itching.

As well as turning to herbal remedies for help in dealing with allergies, it may also be helpful to think about your diet. Foods rich in vitamin C are particularly helpful as this is a natural antihistamine. Histamine is the chemical released when someone with sensitivity to allergens  comes into contact with dander or mould. It causes the allergy symptoms we are all familiar with, including itchy skin and a blocked nose.

On the other hand, alcohol and processed foods tend to be high in histamine which is likely to make your allergy worse.

Does allergic rhinitis go away on its own?

s allergic rhinitis symptoms vary depending on allergen levels in the surrounding air, if you take steps to reduce this, the problem may improve.

Although you cannot control the pollen levels outdoors, you can reduce the amount in your home:

The effects of animal dander can also be minimised by a number of practical measures:

You’ll have to address the root problem when it comes to mould. This might involve fixing a leak in the bathroom or changing the way you dry your clothes. As for dust mites, a dehumidifier can help to make conditions less habitable for them.