Ovulation and the phases of the menstrual cycle

What is ovulation and why is it an important part of the menstrual cycle?

Ovulation is the release of an egg from your ovaries which is required in order for you to fall pregnant. Today, I outline the different phases of your menstrual cycle including ovulation, how you can tell exactly when this is occurring and how different methods of contraception can have an influence.

An introduction to ovulation

Ovulation is the release of an egg from your ovaries and is necessary in order for you to fall pregnant or otherwise, have your period. Ovulation is also an important stage of your menstrual cycle and if you aren’t ovulating, it’s likely you won’t have a period.

On this page, I explain what hormones are responsible for initiating ovulation, how you can keep a track of it, what symptoms or signs indicate that you are ovulating and how different methods of contraception can have an influence.

What is ovulation and the phases of the menstrual cycle?

Most women think of their period when they hear the ‘menstrual cycle’ being mentioned. This is of course a part of it, but actually, the days you are on your period, only accounts for approximately 20% of what is known as the menstrual cycle.

So, what is happening the rest of the time and why is this important? The menstrual cycle can be split into four key phases. The days of each phase below are based on an average woman. 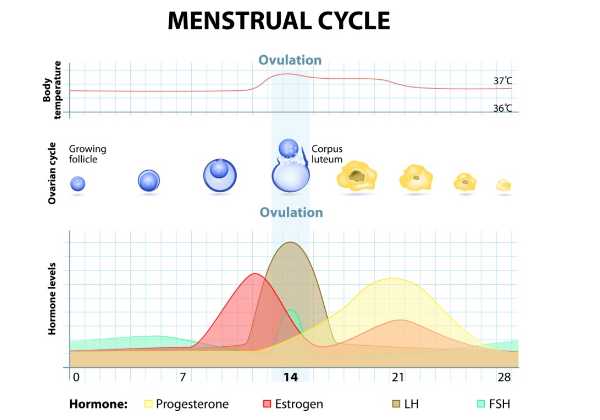 1. The menstrual phase (days 1-5) – Most women are aware of the menstrual phase. The menstrual phase begins on day 1 of woman’s period and lasts for approximately 5 days until the bleeding subsides. During this phase the lining of the uterus is shed and the menstrual fluid leaves out through the vagina – this is what you call ‘your period’. Some women experience symptoms each month and there are different types of periods, from heavy, to painful to irregular – no two women will have exactly the same experience

2. The follicular or proliferative phase (days 1 -13) – The follicular phase also begins on the first day of your period and continues until half way through your cycle. Throughout this phase your hypothalamus stimulates your pituitary gland to release a hormone called follicle stimulating hormone (FSH). This causes a follicle within one of your ovaries, containing an egg, to mature. As this follicle matures, it initiates an increase in oestrogen which allows the lining of your womb to develop

3. Ovulation (day 14) – Around day 14 of your cycle ovulation occurs as oestrogen peaks. This causes the pituitary gland to release a surge of luteinising hormone (LH). This hormone causes your ovary to release the matured egg which is swept into your nearby fallopian tube

4. The luteal or secretory phase (days 15-28) – The luteal phase of your menstrual cycle occurs immediately after ovulation and continues until the end of your cycle. During this time the releases egg travels towards the uterus and has around 24 hours to become fertilized by sperm. Sperm can survive longer than an egg so, having entered the uterus up to approximately 5 days earlier they are  still able to fertilize your egg. Progesterone levels also rise during this phase in order to prepare the womb in anticipation of the egg becoming fertilized and implanted. However, if the egg doesn’t become fertilized, the egg disintegrates and levels of your oestrogen and progesterone begin to decrease rapidly. The drop in these hormones initiates contractions of the smooth lining of your womb and the menstrual phase begins again.

How do you know when you are ovulating?

So, how do you know when you are ovulating and why is this important?

It can be important for a number of reasons; knowing when you are likely to ovulate usually means you have a pretty good idea of your cycle length and therefore you are more likely to successfully predict when your period is due – this also means you are more aware of when some of the associated symptoms might crop up. Also, ovulating each month suggests everything is working as it should, if you aren’t ovulating you may have a hormone imbalance.

However, often the most common reason women want to know when they are going to ovulate is in order to have a better chance of falling pregnant. Your egg only lasts for approximately 24 hours after being released from your ovary before it disintegrates, so it is important to ensure that sperm is available during this window if you are hoping to fall pregnant.

Below I outline some of the ways in which you can predict when you are due to ovulate.

As ovulation enables you to become pregnant, your body changes and adapts in order to make this as likely as possible – this isn’t ideal for those of you that do not want to become pregnant. Therefore, the easiest way to prevent becoming pregnant is to stop ovulation.

There are many different methods of contraception, with those specifically targeting ovulation being particularly reliable methods.

Visit your doctor where they can talk over the options with you but since an increase in oestrogen is required for ovulation to occur, progesterone-based methods are a sure way to prevent ovulation. Common examples of these include the mini pill, the implant or the intrauterine system (IUS) – this is a hormonal version of the coil.

Most methods of contraception will stop ovulation for as long as you require them to. If you wish to come off the contraception, your menstrual cycle should return to normal again after a few months and ovulation will start up again.

When will I know if I’ve stopped ovulating?

Having a period is a good indicator that you’re ovulating (unless you are on some types of contraception, such as the pill as this often isn’t a true period).

So, you usually begin ovulating around the time of you first period and will continue to do so each month until you reach the menopause.

If you have irregular periods or miss one, this could suggest you aren’t ovulating and this should be investigated. Your doctor can run any necessary tests – often a hormone imbalance can be the cause of a failure to ovulate, for example low levels of oestrogen.

As you approach the menopause your periods will become less frequent and so will ovulation. Eventually as you near the menopause, your ovaries stop releasing eggs and you can no longer become pregnant – your child-bearing years are over!

Read more articles from our women's health advisor Emma Thornton
4 skin issues caused by your periodDo periods make you sleep more?Coping with mood swings: Part 2Coping with mood swings: Part 1Why am I so bloated during my period?Why are my period cramps worse at nightCan vitamin D deficiency make your period worse?5 reasons to cut back on caffeine during your periodWhy is my menstrual cycle lasting longer than usual?Top tips for coping with your period during summerDoes the pill make you more sensitive to caffeine?Is it normal to faint during your period?7 facts about endometriosisDoes stress make periods worse?Can cinnamon help period cramps?Is it normal to get a cold before your period?How to fight fatigue on your periodWhy do I have back pain on my period?Does the pill make you gain weight?15 interesting facts about your period10 things that can negatively affect your period9 side effects of the pill and how to overcome them7 period myths6 drinks to help period cramps6 reasons for sudden heavy periods5 vitamins and minerals to help you through your period5 surprising period symptomsA beginners guide to periodsBoozy periodsCan period pain get worse with age?Can periods really synchronise?Can you have an environmentally friendly period?Can your period change your toilet habits?Coping with your period during exam timeDietCan exercise help manage your monthly symptoms?Could going meat-free help symptoms of PMSFoods to help you through your periodHome remedies for menstrual crampsHow can stress affect your period?How to deal with your period on holidayHow to get a good night's sleep on your periodHow to have a happy periodHow's yours? Frequently asked, personal periods questions answered!Is your period upsetting your digestion?Methods of contraceptionOvulation and the menstrual cyclePMS or PMDD - how to know the differencePMS through the ages: what to expect and how to preparePregnancy and the menstrual cycleSimple exercises to do on your periodThe low down on sanitary productsThe menopause and your periodsUnderstanding your period and hormone imbalanceWhy has my period suddenly stopped?Why period leave is problematic