Menstrual cramps can be debilitating and have a huge impact on your day-to-day life. Today I’m taking a look at some research surrounding cinnamon to find out if this handy spice could help to ease painful period cramps.

Where does cinnamon come from?

Did you know that cinnamon was once more valuable than gold? Cinnamon has been around for centuries and has been used for an array of purposes, like embalming, making perfume and curing bad breath1, as well as flavouring some of your favourite sweet and spicy dishes! To make cinnamon, the inner bark is taken from the Cinnamomum tree and, as it dries, it forms the curly rolls that we know as cinnamon sticks. Cinnamon gets its tell-tale scent and spicy flavour from its oils, which are high in a compound called cinnamaldehyde.2

What are the health benefits of cinnamon?

Research has found that the cinnamaldehyde in cinnamon may have antimicrobial,3 antibacterial4 and antifungal5 properties. Plus, cinnamon also contains lots of antioxidants.6 As we know, antioxidants are important in protecting our cells from the damage caused by free radicals. Cinnamon is also high in manganese, which can help to regulate blood sugar levels and decrease inflammation.7

So, cinnamon has traditionally been used for all sorts of purposes, and research has indicated that it has a lot of health benefits - but how might it help period cramps? Well, one study published in 2015 found that cinnamon was effective in relieving symptoms experienced by women who suffered from primary dysmenorrhea, or painful period cramps.8

The study involved 76 women between the ages of 18 and 30 who suffered with primary dysmenorrhea, with 38 women given capsules containing dried cinnamon bark powder, while the other 38 women received a placebo capsule. The women were instructed not to use any oral contraceptives or painkillers during the study, and they documented their symptoms on a scale of severity.

The women who were given the cinnamon capsules reported a reduction in the severity and duration of period pain, nausea and vomiting, while less significant results were found in those who were given the placebo. So, this indicates that cinnamon could be used to ease painful cramps as well as other nasty symptoms associated with your period! 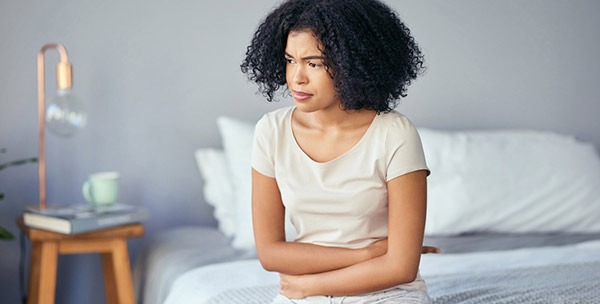 Finally, another study published in 2015 looked into the effectiveness of cinnamon and Ibuprofen on period cramps. This study compared the severity of pain experienced by women who were either taking Ibuprofen, cinnamon or a placebo. The results showed that cinnamon significantly reduced both the severity and the duration of pain compared to placebo; but did so less effectively than Ibuprofen.9

Therefore, although the effects of cinnamon weren’t as strong as Ibuprofen, this research still indicates that it might be worth sprinkling your breakfast with some extra cinnamon to help ease your nasty period cramps! If you need some inspiration on how to incorporate cinnamon into your diet, why not try out some of our great recipes like this cinnamon banana bread, or these cinnamon and chia energy balls?

If cinnamon isn’t your favourite flavour, then there are other home remedies that you can try if you suffer from painful period cramps. Balance Mineral Drink is a quick and easy way to boost your magnesium levels, as low magnesium levels can be responsible for painful spasms and cramps during your period. Plus, it’s full of other vitamins and minerals which can give you an energy boost if you’re feeling run-down and demotivated!

Another way to ease your period cramps is using heat! Grab your hot water bottle or take a nice warm bath to increase the blood flow to your stomach, which will help to relax the muscles in your uterus which are contracting and causing you pain.

Check out my blog, home remedies for menstrual cramps, for more simple ways to try to ease your period pains.

Read more articles from our women's health advisor Emma Thornton
4 skin issues caused by your periodDoes dieting affect your period?Do periods make you sleep more?Coping with mood swings: Part 2Coping with mood swings: Part 1Why am I so bloated during my period?Why does my stomach get upset during my periodWhy are my period cramps worse at nightCan vitamin D deficiency make your period worse?5 reasons to cut back on caffeine during your periodWhy is my menstrual cycle lasting longer than usual?Top tips for coping with your period during summerDoes the pill make you more sensitive to caffeine?Is it normal to faint during your period?7 facts about endometriosisDoes stress make periods worse?Can cinnamon help period cramps?Is it normal to get a cold before your period?How to fight fatigue on your periodWhy do I have back pain on my period?Does the pill make you gain weight?15 interesting facts about your period10 things that can negatively affect your period9 side effects of the pill and how to overcome them7 period myths6 drinks to help period cramps6 reasons for sudden heavy periods5 vitamins and minerals to help you through your period5 surprising period symptomsA beginners guide to periodsBoozy periodsCan period pain get worse with age?Can periods really synchronise?Can you have an environmentally friendly period?Can your period change your toilet habits?Coping with your period during exam timeDietCan exercise help manage your monthly symptoms?Could going meat-free help symptoms of PMSFoods to help you through your periodHome remedies for menstrual crampsHow can stress affect your period?How to deal with your period on holidayHow to get a good night's sleep on your periodHow to have a happy periodHow's yours? Frequently asked, personal periods questions answered!Is your period upsetting your digestion?Methods of contraceptionOvulation and the menstrual cyclePMS or PMDD - how to know the differencePMS through the ages: what to expect and how to preparePregnancy and the menstrual cycleSimple exercises to do on your periodThe low down on sanitary productsThe menopause and your periodsUnderstanding your period and hormone imbalanceWhy has my period suddenly stopped?Why period leave is problematic