home > health > periods > does the pill make you gain weight?

Does the pill make you gain weight?

Many women are put off using the contraceptive pill because they believe that weight gain is a side effect. In this blog I’ll put to rest these rumours, while explaining why some bodily changes caused by the pill may be perceived as weight gain.

Does the pill make you gain weight?

Weight gain is often reported as a side effect of the contraceptive pill, so often that it has been listed as a common side effect on the information sheets which accompany your prescription. But a large review of the research has failed to find a link between the contraceptive pill and weight gain, finding that women tend to gain weight as they age, regardless of whether or not they take the pill.1

The claim that the contraceptive pill causes weight gain doesn’t seem to have totally false foundations, though. Early versions of the pill offered to women in the 1960s could well have caused women to gain weight, as they contained very high levels of oestrogen, which can increase your appetite and fluid retention. Nowadays, however, the pill uses a much smaller dose of hormones, so it is less likely to cause increased appetite, and any fluid retention should only be temporary.

Long-term changes in weight have not been attributed to the pill. One longitudinal study found that only two factors had an effect on weight change: age was related to weight gain, while smoking was linked to a decrease in weight over time.2 Some women do experience weight changes when they first start to take the pill, but this is short-term and should balance out after a few months. However, there is evidence that the pill can cause other changes to your body shape, which could be mistaken for weight gain.

Can the pill make you fat?

Women tend to carry subcutaneous fat (which has lots of oestrogen receptors) around their hips, thighs and breasts. During puberty, girls tend to develop wider hips and larger breasts as changing levels of oestrogen alter how the body distributes this fat. Therefore, it could be that, as the pill alters oestrogen levels, it could alter where fat is stored. However, it has not been found to actually increase how much fat is stored in the body. 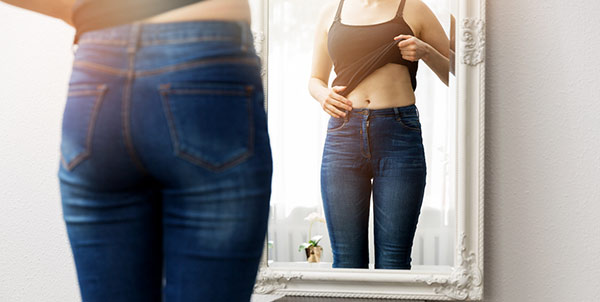 Why does the pill make me feel bloated?

Many women experience bloating in their abdomen, hands, feet and breasts the week before their period, even if they aren’t on the pill. This bloating can often be perceived as weight gain. However, this is usually just water weight which should subside once menstruation begins. Oestrogen seems to be responsible for water retention, so fluctuating levels of oestrogen in the week or two before your period could be the reason you’re feeling bloated.

When it comes to the pill, this bloating can be experienced at different times of the month too. This is because taking the pill every day means oestrogen levels remain relatively constant throughout the month, rather than rising to thicken the lining of the uterus at certain times of the month. Plus, the synthetic oestrogen within the pill is stronger than natural oestrogen, therefore this could be responsible for excess bloating if you’re on the pill.3

Top tip: Your diet is really important when it comes to bloating during your period. I would advise doing your best to avoid salty and sugary foods, as well as alcohol and caffeine. Eat little and often, and try to avoid caving into cravings for heavily processed, fatty foods.

Magnesium is a great tool for tackling bloating. Natural sources of magnesium include bananas and dark chocolate and A.Vogel’s Balance Mineral Drink contains a mixture of vital nutrients such as magnesium, zinc and vitamin D – try adding it to a fruit smoothie or mixing with water for a refreshing strawberry drink.

Does the pill affect muscle growth?

Although the pill has not been proven to cause weight gain, research has shown that it could impede the process of building muscle and have an effect on your gym progress. One study from Texas A&M University found that women who were on the combined pill gained 40% less muscle from intense resistance training than women who were not on the pill.4

Compared to men, women’s bodies have lower levels of androgens (steroid hormones), which are involved in building muscles and keeping bones strong. However, this study found that women who were on the pill had even lower levels of these hormones than women who were not on the pill. Researchers attribute this to the progesterone inside the combined pill, which may bind to the same receptors as androgens, therefore inhibiting androgens from doing their job.

Plus, not only can the pill affect muscle growth in this way, but this study also found that women who were on the pill produced higher levels of cortisol than the other women. Cortisol, one of our main stress hormones, is associated with the breakdown of muscle and prevents tissue growth. So, although the pill has not been directly linked to weight gain, it does seem to have an effect on muscle growth, which could explain why you feel like your efforts at the gym aren’t paying off.

Top tip: If you are on the combined pill and you feel like this might be stopping you from progressing in sports and other activities, talk to your doctor. There may be another form of contraceptive available that won’t impact your lifestyle in this way. 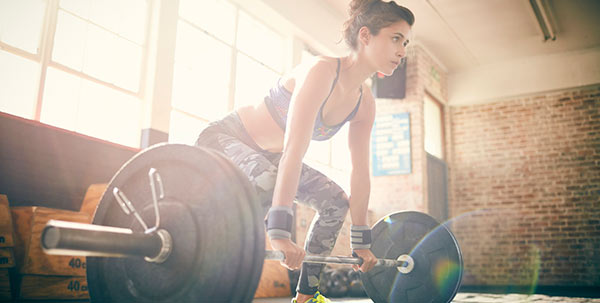 How does the pill change your body shape?

So, the pill has not been found to cause weight gain, but it could be responsible for a change in your body shape. If your fat distribution is altered you may find that you carry more fat around your hips, thighs and breasts as a result of the hormones from the pill. If your fluid retention is increased, this might also be responsible for swollen breasts, as well as swelling in your abdomen, hands and feet. Finally, if your muscle growth is affected you might feel like this is impeding on your sporting progress.

All of these symptoms can lead to the impression that you have gained weight because of the pill, even if that is not the case. If bloating and other symptoms persist longer than a few months, talk to your doctor about possibly switching to a different pill or another method of contraception. It may be that there are different factors at play, so don’t be so quick to blame the pill for your weight gain! Diet and exercise are, of course, very important. Have a look at our Get Active hub to find out some fun and easy ways to get yourself moving, or check out our Food hub for some healthy inspiration!

Read more articles from our women's health advisor Emma Thornton
4 skin issues caused by your periodDo periods make you sleep more?Coping with mood swings: Part 2Coping with mood swings: Part 1Why am I so bloated during my period?Why does my stomach get upset during my periodWhy are my period cramps worse at nightCan vitamin D deficiency make your period worse?5 reasons to cut back on caffeine during your periodWhy is my menstrual cycle lasting longer than usual?Top tips for coping with your period during summerDoes the pill make you more sensitive to caffeine?Is it normal to faint during your period?7 facts about endometriosisDoes stress make periods worse?Can cinnamon help period cramps?Is it normal to get a cold before your period?How to fight fatigue on your periodWhy do I have back pain on my period?Does the pill make you gain weight?15 interesting facts about your period10 things that can negatively affect your period9 side effects of the pill and how to overcome them7 period myths6 drinks to help period cramps6 reasons for sudden heavy periods5 vitamins and minerals to help you through your period5 surprising period symptomsA beginners guide to periodsBoozy periodsCan period pain get worse with age?Can periods really synchronise?Can you have an environmentally friendly period?Can your period change your toilet habits?Coping with your period during exam timeDietCan exercise help manage your monthly symptoms?Could going meat-free help symptoms of PMSFoods to help you through your periodHome remedies for menstrual crampsHow can stress affect your period?How to deal with your period on holidayHow to get a good night's sleep on your periodHow to have a happy periodHow's yours? Frequently asked, personal periods questions answered!Is your period upsetting your digestion?Methods of contraceptionOvulation and the menstrual cyclePMS or PMDD - how to know the differencePMS through the ages: what to expect and how to preparePregnancy and the menstrual cycleSimple exercises to do on your periodThe low down on sanitary productsThe menopause and your periodsUnderstanding your period and hormone imbalanceWhy has my period suddenly stopped?Why period leave is problematic