5 reasons to cut back on caffeine during your period

Caffeine can be an easy go-to when you’re feeling tired and need a boost of energy to get yourself through a tough study session or a long day at work. However, too much caffeine can be detrimental to our health, especially during our period. In this blog, I’ll take a look at why you should think about cutting down on your caffeine intake at this time of the month.

How much is too much caffeine?

The daily recommended limit of caffeine for adults is 400mg, which is around 4 cups of coffee. However, you should bear in mind that caffeine affects people differently depending on a range of factors such as gender, genetics and use of the contraceptive pill. Therefore, whilst small amounts of caffeine may give rise to negative side effects in some people; others might be less sensitive and able to consume more than 400mg of caffeine without side effects.

There are a range of side effects that have been linked to consuming too much caffeine, but how can excessive consumption of caffeine affect your period in particular?

Low energy and tiredness are common symptoms associated with menstruation and can be caused by fluctuating hormones. Oestrogen levels drop drastically in the few days before your period which can leave you feeling zapped of energy. Low energy levels during your period could also be caused by iron deficiency, which I’ll touch on later.

Now, this can be difficult to cope with in itself but, add 10 cups of coffee into the mix, and you could be in for a rough week! Consuming too much caffeine can seriously hinder your sleep which can, of course, have a knock-on effect when it comes to energy levels.

This can be true even if you make the effort not to drink too much coffee or other caffeinated beverages right before bed. This is because caffeine has a half-life of around 5 hours; in other words, 5 hours after your last cup of coffee, half of that caffeine could still be floating around in your system causing trouble.

So, cut back on the caffeinated beverages around the time of your period to avoid disrupting your sleep and impacting your energy levels, especially if fatigue and low energy are symptoms which trouble you each month.

2. Caffeine can affect your mood

Another symptom many women have to endure during their period is mood swings, including anxiety and weepiness. This can be made even worse if you suffer from a hormone imbalance: in terms of anxiety and low mood symptoms, these can be caused by a dominance of progesterone over oestrogen.

On top of this, caffeine stimulates the sympathetic nervous system and triggers the release of adrenaline. This means that too many cups of coffee or cans of energy drink can leave you feeling nervous, jittery and anxious as well as putting pressure on your adrenal glands.

If anxiety is a major symptom during your period, you might want to try AvenaCalm, a herbal remedy that can help to manage stress and anxiety. Check out our Mood hub for more advice on coping with anxiety and stress. 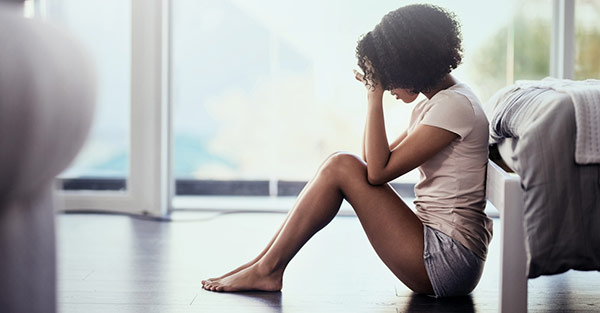 3. Caffeine can upset your digestion

You might already be aware that your digestion isn’t at its best in the week leading up to your period. Many women will experience a sluggish bowel in the days prior to their period because, in preparation for menstruation, a great deal of blood is redirected to your abdomen and reproductive organs, so other processes can suffer. Plus, a drop-off in oestrogen levels can slow the contractions of the gut and make it more difficult for waste to pass through.

As if that isn’t bad enough, you could be more prone to diarrhoea during your period too. At the time of your period, the cells lining the womb release hormone-like substances called prostaglandins which are involved in the painful abdominal cramps associated with periods. But these prostaglandins can often leave the uterus and reach the bowels, prompting these muscles to contract and resulting in diarrhoea.

So, all this is going on in the lead up to, and during, your period. If you add excessive caffeine consumption into this equation, things can get even more difficult. As I’ve mentioned, caffeine is a stimulant which can speed up bodily processes such as digestion. The last thing you want to do when your gut is on the blink is drink copious amounts of coffee and upset things even further!

So, cut back on caffeine in the run up to your period to avoid worsening digestive upsets. And, if constipation or diarrhoea are symptoms which trouble you regularly, you can try using Silicol gel to soothe your gut and remove toxins which irritate the lining of your digestive tract. 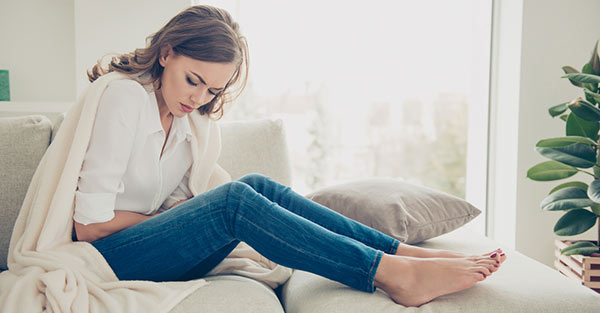 4. Caffeine can cause dehydration

Now, it’s always important to make sure that you’re drinking enough fresh, plain water but this is even more important during your period. If you’re not drinking enough water or if you’re prone to diarrhoea during your period, you could be at risk of dehydration. This can come along with low energy levels, bloating and even period cramps – none of which are pleasant!

This is where caffeine comes in, as it is a natural diuretic. While small doses are less harmful, consuming excess amounts of caffeine can cause you to urinate more often which can, in turn, cause you to lose vital fluids. Cutting back on the caffeine and swapping in fresh water will keep you hydrated and help to reduce your chances of suffering from nasty period symptoms.

5. Caffeine can reduce your absorption of nutrients

Finally, it’s super important that you are getting the right amount of nutrients during your period to help avoid unwanted symptoms and make your monthly cycle easier to deal with. For instance, low levels of magnesium can worsen period cramps, as well as increase the likelihood of suffering from mood swings.

Now, as I’ve mentioned, caffeine can act as a diuretic, especially when consumed in large amounts. By increasing the rate at which you pee, this can cause you to lose vital nutrients through your urine. Switching your energy drinks for Balance Mineral Drink can not only give you a much-needed boost of energy, it can also replenish vital nutrients like magnesium, potassium and vitamin D.

Another reason to cut back on caffeine during your period is that excessive caffeine consumption can impact your health by blocking your absorption of iron. This is especially true if you drink lots of tea and coffee, as these contain a type of polyphenol called tannins, which also block the absorption and storage of iron in the body.

Since women lose iron through their blood when they menstruate (particularly those who experience heavy periods) we are already at risk of low iron levels which can leave us feeling dizzy, light-headed and lethargic. These symptoms are not something you want to experience for a week out of every month! So cut down on your teas, coffees and energy drinks to make your period more manageable. 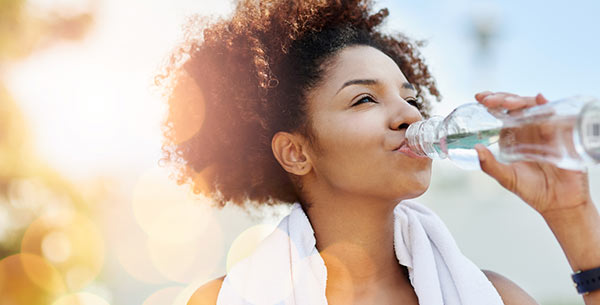 Read more articles from our women's health advisor Emma Thornton
Coping with mood swings: Part 2Coping with mood swings: Part 1Can vitamin D deficiency make your period worse?5 reasons to cut back on caffeine during your periodWhy is my menstrual cycle lasting longer than usual?Top tips for coping with your period during summerDoes the pill make you more sensitive to caffeine?Is it normal to faint during your period?7 facts about endometriosisDoes stress make periods worse?Can cinnamon help period cramps?Is it normal to get a cold before your period?How to fight fatigue on your periodWhy do I have back pain on my period?Does the pill make you gain weight?15 interesting facts about your period10 things that can negatively affect your period9 side effects of the pill and how to overcome them7 period myths6 drinks to help period cramps6 reasons for sudden heavy periods5 vitamins and minerals to help you through your period5 surprising period symptomsA beginners guide to periodsBoozy periodsCan period pain get worse with age?Can periods really synchronise?Can you have an environmentally friendly period?Can your period change your toilet habits?Coping with your period during exam timeDietCan exercise help manage your monthly symptoms?Could going meat-free help symptoms of PMSFoods to help you through your periodHome remedies for menstrual crampsHow can stress affect your period?How to deal with your period on holidayHow to get a good night's sleep on your periodHow to have a happy periodHow's yours? Frequently asked, personal periods questions answered!Is your period upsetting your digestion?Methods of contraceptionOvulation and the menstrual cyclePMS or PMDD - how to know the differencePMS through the ages: what to expect and how to preparePregnancy and the menstrual cycleSimple exercises to do on your periodThe low down on sanitary productsThe menopause and your periodsUnderstanding your period and hormone imbalanceWhy has my period suddenly stopped?Why period leave is problematic