Does the pill make you more sensitive to caffeine?

I’m sure we’ve all paid the price when trying to wind down after a long day of guzzling energy drinks or cups of coffee. But, could the same amount of caffeine affect some people differently? And, could your birth control be making you more sensitive to the effects of caffeine? Today I take a look at the research.

Side effects of too much caffeine

Consuming too much caffeine can have some nasty side effects. It is recommended that adults consume no more than 400mg of caffeinated coffee per day, which is around 4 cups. High doses of caffeine could have some negative effects on your health, including:

However, some effects of consuming too much caffeine might not be so readily noticeable: caffeinated drinks such as tea and coffee can increase the excretion or block the absorption of important nutrients such as calcium, iron and magnesium. Low iron levels can leave you feeling tired, weak and light-headed; low levels of magnesium can make you more sensitive to pain and can actually worsen painful period cramps, as a lack of magnesium delays messages being sent from the brain to the muscles.

A great deal of research has been conducted on caffeine and how it affects the human body. Caffeine binds to adenosine receptors in the brain and stops our brain from signalling that it is time for the body to rest. With the adenosine receptors inhibited by caffeine, dopamine and other natural stimulants can function freely without being restricted.

What’s more, studies have indicated that caffeine tends to affect people differently depending on a wide range of factors such as DNA, sleep chronotype and gender.

Research suggests that our genes can play a role in how we metabolise caffeine and how much of an effect it has on our body.1 In 2010, a review of twin studies found that some people have a certain gene which affects how their body metabolises caffeine and puts them more at risk of adverse side effects.

The same gene is associated with caffeine-induced anxiety and panic disorders, which could suggest why some people are more likely to experience anxiety and palpitations when they consume too much caffeine. 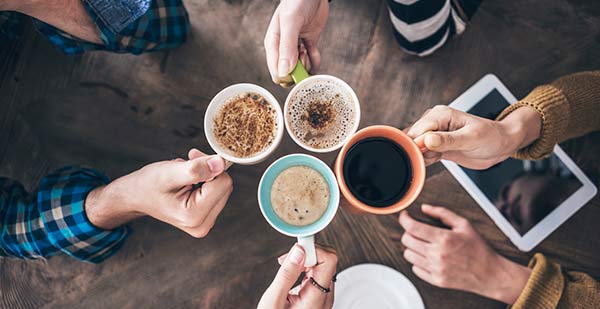 Another study found that students who would wake up early in the morning and sleep well at night were more affected by caffeine than those who often stayed up late and considered themselves to be night owls.2

However, many of the participants consumed caffeine quite regularly and, as we know, this can affect your sleep pattern. So, it could be that the night owls were less affected by caffeine because they consumed large quantities of caffeine regularly, and this is why they were night owls in the first place!

All of the above studies have some interesting implications when it comes to caffeine consumption. If you suffer from anxiety disorders, it may be best to avoid consuming a lot of teas, coffees and energy drinks; if you tend to struggle to get to sleep at night or wake up in the morning, you should perhaps take a look at your caffeine consumption.

Does the pill make you more sensitive to caffeine?

So, as the previous study suggested, men tend to be more sensitive to the effects of caffeine than women. However, this trend is thought to be interrupted when it comes to women who are using the contraceptive pill.

Yet another interesting study on the effects of caffeine found that women who were taking the hormonal birth control pill were more sensitive to caffeine than women who were not on the pill.1

Researchers suggest that hormonal birth control may inhibit the enzyme which breaks down caffeine, so that caffeine tends to stay in the system of women using birth control longer than it would in other women. So, the same amount of caffeine could hit you twice as hard if you’re on birth control.

What is interesting about the fact that caffeine stays in the body longer when women are on the pill is that fewer minerals were lost through their urine too. This is because the aforementioned enzyme inhibits the diuretic effect of caffeine (which is why it stays in the body for longer) and, therefore, slows down the rate at which minerals are excreted through the urine.

As caffeine is metabolised slower by women using the pill, it is thought that the side effects of a strong cup of coffee or energy drink can last even longer for these women. So, women on birth control might feel the jittery effects of caffeine for up to twice as long and could be more at risk of suffering from anxiety and palpitations – especially if they are predisposed to these conditions already.

How does caffeine affect your period?

In general, it’s best to avoid large quantities of caffeine, especially if you are prone to anxiety. During your period you should stick to drinking lots of fresh water and you can add in some Balance Mineral Drink if you’re feeling worn-down and need an energy kick.

Caffeine can also be detrimental to your sleep so if you still like to enjoy the odd cup of coffee, make sure not to drink it later in the day! The effects of caffeine can take several hours to wear off (especially if you’re on the pill!) so opt for a relaxing herbal tea in the evening rather than a coffee that could keep you up all night. If you struggle to sleep well during your period, you can read some of my top tips here.

Too much caffeine can also upset your digestion, which can already be sensitive around the time of your period, due to the reallocation of blood to your womb and abdomen. As caffeine is a stimulant and a diuretic, it can cause stomach upsets and put you at risk of losing vital nutrients and fluids. Again, make sure to drink plenty of water and avoid caffeinated drinks if you have a sensitive stomach.