How music can enhance your run

We interact with music both unconsciously and consciously, at behavioural, emotional and physiological levels. Today I'll be sharing how listening to music can enhance your run and sharing my motivational running songs playlist made of songs listened to by professional atheletes as well as my own favourites!

The benefits of listening of music and running

Music has incredible effects on the brain and is the fastest way to change your mood. Not only is it an effective tool for influencing emotional states, it can also be used to synchronise physical movement and enhance academic and sports performance.

While running is physical, it has been shown to affect the brain through releasing reward hormones such as serotonin, endorphins, and dopamine. It's not surprising that scientists have found that music has the ability to enhance running performance!

Music is processed in many different areas of the brain including the amygdala (which manages the emotional reaction to music), the cerebellum (which is involved in movement and emotional reactions), and the hippocampus (responsible for memory of music, musical experiences, and contexts).

The effects of listening to music before running

Many Olympic athletes, such as US swimmer Michael Phelps listen to music before they compete to get them motivated.

Listening to music pre-run has been shown to lead to a decrease in vagal tone,  which is responsible for regulating the resting state of the majority of body’s internal organs including the heart, lungs and eyes. The decrease in vagal tone results in a more aroused, more alert state which prepares the body before running. 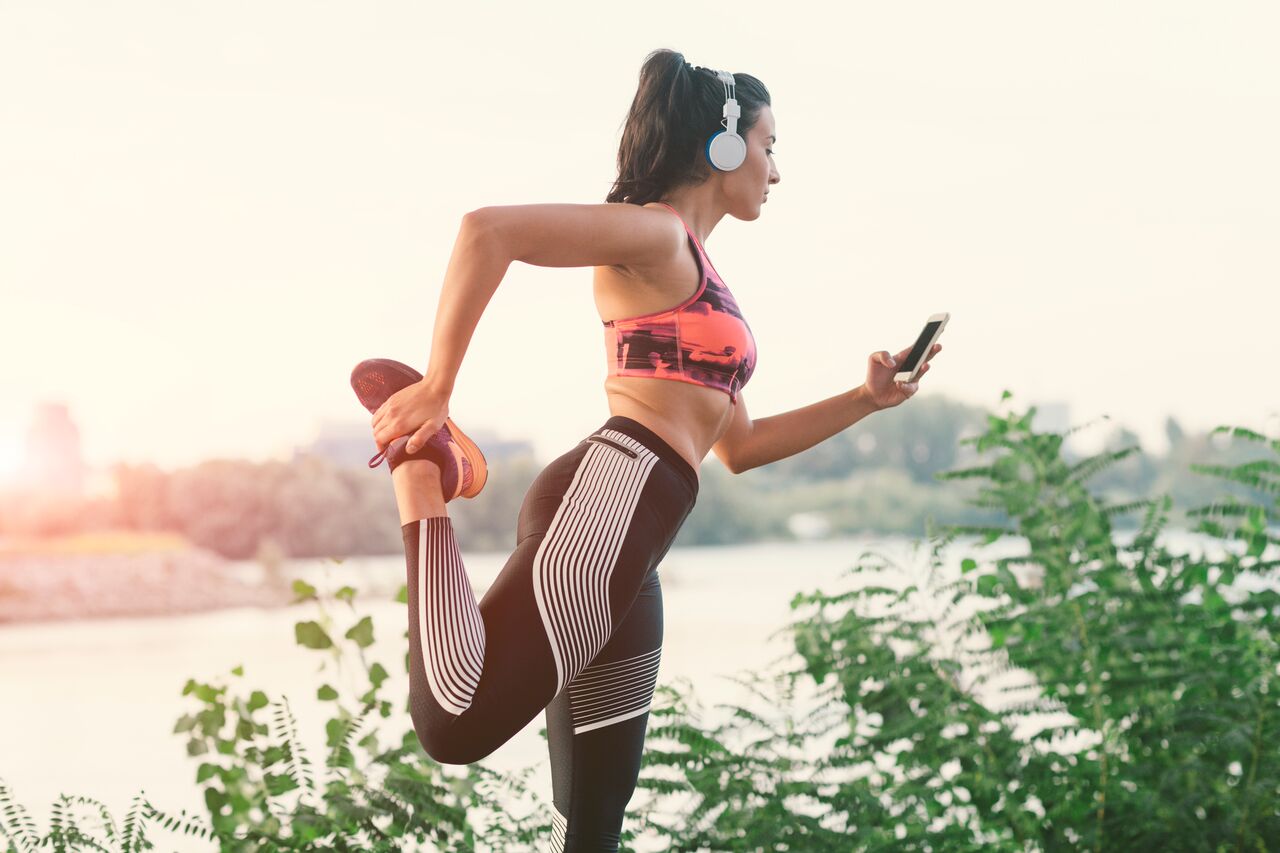 The effects of listening to music during a run

Listening to music during your run can improve your speed, distance, and motivation. Louder and faster music has been shown to increase heart rate and boost speed in comparison to quieter slower music.

According to research, listening to music while running can reduce your rate of effort by 12% and increase your endurance levels by 15%.  Music can also be a useful distraction technique and improves performance by drawing your attention away from feelings of fatigue and pain while running.

Listening to music after a run

What should I listen to?

While music taste is independent and personal, it has been suggested that music with a strong bass makes people feel more powerful.  Look at the beats per minute (bpm) to determine how fast a song is and how it fits with the intensity of your workout. Songs for pre-run, warm-up, and stretching should generally range from 90-110 bpm, whereas mid-run songs should range around 110-140 bpm.

There are loads of playlists out there that are tailored to running – explore them and find songs that resonate with you. I’ve compiled a playlist of motivational running songs used by professional athletes (Stronger, Eye of the Tiger, and Eminem) as well as some of my own personal favourites to get you started. What is your favourite workout music?

Looking for a treatment to relieve pain in conditions such as muscle aches or pains, stiffness, rheumatic pain or after sporting injuries?

To find local independent stores in your area that sell Atrogel Arnica gel, simply type your postcode below.

 Get active with our exercise videos

Other
3 surprising benefits of muscle-strengthening workouts4 exercise guidelines for older adults5 best snacks for exercising5 chair-based exercises5 exercise tips for older adults5 benefits of exercising outdoors5 drinks to boost sporting performance5 ways exercise is good for the mind6 amazing ways exercise can help you6 movement myths6 of the best low impact sports10 dos and don'ts after exercise10 motivational tips to keep active during lockdown12 ways to exercise as a familyAre 10000 steps a day really necessary?Are you sitting too much? Find out the effects of a sedentary lifestyleA beginner's guide to strength trainingBest exercises for weight lossBoost your mood through exerciseBored of exercising? Try these unique sports!Can too much exercise make you ill?Easy stretches to do at your deskExercising when you are super busyFind the energy to exercise after workFoods to improve sporting performanceGet fit without going to the gymHealthy aging - how exercise supports the immune systemHow can I make my walk more interesting?How can I motivate myself to workout?How does exercise affect cholesterol levels?How does exercise affect ageing?How does exercise improve your immune system?How long does it take for exercise to improve mood?How much do I need to walk to lose weight?How much exercise do we really need?How much exercise is too much?How to keep your exercise plan going after lockdown Should I exercise when I am tired?Tackling inactivity - Are we becoming less active?What are the health benefits of walking?What are the health benefits of being in nature?What happens if you don't eat after a workout?What is resistance training?What should be included in a cool down?Which exercise is best for stress?

Running articles
A.Vogel Talks RunningHow to do a running warm up6 ways running relieves stressWhy does running make my back ache?What causes a runner's high?12 handy tips for running in winterEndurance running for beginners7 ways to increase running enduranceWhat to eat before a 5K or 10KHow to boost your energy during a runWhat to eat to recover after your run10 tips to help heavy legs while runningBreathing tips for long distance runnersHow to train for a 5KWhy we suffer fatigue after runningHow to start runningHow to improve running techniqueMotivational running songsStretches for runnersShin splints – what causes them and what can you do?7 tops tips to prevent shin splints from runningWhat should I eat before a morning runShould I start Chi running?Beetroot Juice for endurance exerciseWhy you should be running outdoors this winter5 tips for running in cold weather

Cycling articles
A.Vogel Talks CyclingHow do I get started cycling?How long should a beginner cycle?How do I improve my cycle speed?How to stay hydrated during a long-distance cycleHow to prepare for a long-distance cycle7 great snacks for cyclingBeetroot Juice for endurance exerciseStretches for cyclistsHow to get your bike size just right

Walking articles
A.Vogel Talks WalkingCan you lose weight just by walking?Does walking improve mood?How do I walk more?How do you start hillwalking? How do you stay cool while walking in the heat?Is walking good for anxiety?11 walking tipsWhat are the health benefits of walking?How do you keep bugs away when walking?Are 10,000 steps a day really necessary?

Swimming
What are the 6 health benefits of swimming?

Workout articles
How can I tone my arms while sitting?Does strength training improve sleep?Cool down exercises for any activity 5 exciting ways to exercise more4 good exercise workouts for kidsExercising as you get olderWhy is recovery important after exercise?How can I motivate myself to workout?5 benefits of exercising outdoorsA.Vogel Talks WorkoutsAn easy 10 minute workout for beginnersDo you really need a protein shake after your workout?How to ease muscle pain after a workoutTop 5 foods to help you recover from a workoutWhat is a core workout? How to build muscle naturally4 easy exercises you can do with resistance bandsSimple warm up exercises for any type of activityWhich exercise quizStretches for tight hamstringsHow to avoid hyperextension10 top tips on staying fit when you're super busyHow to prevent overuse injuryHow to recover from overuse injuryHow to recover from a workoutAre hormonal changes affecting the way that you exercise?6 foods you should avoid after a workoutCould exercise help to boost your memory?Best exercises to relieve upper and middle back painHow to motivate yourself to exercise more

Diet and exercise
Are beetroots good post workout?Battling body fat - exercise and diet tipsDoes beetroot improve athletic performance?Is there such a thing as too much protein?What is a good post-workout snack?

I have knee pain while I’m running, how can I prevent this?

Knee pain is pretty common while running, but it is also easy to prevent! Check your footfall when ...
Read more >

I have been cycling for several months now and I have developed a pain in my left hip. What could be causing this and how can I fix it?

Hip pain while cycling can occur through over-training or stiffness in the hip joints. Make sure ...
Read more >

Should I eat breakfast before running?

This depends on the length and intensity of the run, if you are running for under an hour generally ...
Read more >

These tasty protein balls are the perfect pre- or post-workout snack!

As the A.Vogel Muscles and Joints advisor, I recommend Atrogel® Arnica gel to ease stiff, sore muscles after exercise.

Peanut butter is a great food to fuel up on before a 5K or 10K because of its low GI, high carbohydrate and high protein content.

Join Hetty and Martin in the A.Vogel gardens to improve your flexibility.