How Sage & Agnus castus can help you

This week I continue to look at popular supplements and herbs which can help you during the menopause. This time I take a look at Sage and Agnus castus and explain how these two herbs can help ease some of the most common symptoms of the menopause and peri-menopause.

Hello, and welcome to my weekly video blog.

Now for those of you that have been watching for a little while, you know that nearly every week, I will make recommendations of certain herbs or supplements that we know can be very beneficial in the menopause. So I thought that just every now and again, I would actually go into more detail in either a herb or a supplement, just to give you a better idea of how exactly it may be able to help you through the menopause.

Today, on A.Vogel Talks Menopause, I’m going to talk about sage, and I’m going to talk about Agnus castus. Now I love herbs, because they’re very simple, but they can do such a lot. And very often, they can work quite quickly. And it’s really interesting, if you look closely at herbs, some of them have what’s called a signature, and this means that it can actually give a clue as to what it can be helpful for.

And for those of you that grow sage either in a garden or in a pot on the windowsill, if the sun is shining really brightly, if you look closely at the leaves, sometimes you can actually see little beads of moisture. And this is an indication that sage can help with hot flushes and night sweats.

Now the Latin name for sage is “salvare” and that means to save. And in the ancient times, because this herb has been known for hundreds and hundreds and hundreds of years, in ancient times, it was actually used as a cure-all. Unbeknown to the people that used it then, it’s actually anti-bacterial, and it can help with a lot of different bacterial infections. So it was used for a lot of different ailments. In the middle ages, the monks actually used to use it to help with concentration and focus. And if you think about it, another word for wise is sage, so they thought that it actually helped with memory as well.

How does sage work?

Now, how on earth does sage work? We have a little gland in the brain called the hypothalamus, and the hypothalamus is a little bit like your central heating temperature control, the one that maybe you have in the hall or in a little box on the mantelpiece. And if your central heating thermostat goes wrong, then the central heating can go on and off. It might get too hot. It might get too cold. It might not even go on at all. And we know that during the menopause, the hypothalamus can get really stressed by all the different hormonal changes and the other changes that the body goes through at this particular time. And it goes a bit offline, and that means that your body just can’t actually regulate the temperature closely enough, and you might find that you get hot very quickly, that you will tend to sweat. You might find that you cool down very quickly. So this is all part and parcel of the way that the hormones can actually interfere with something like the hypothalamus.

So the sage actually helps to re-tune it, to get it back into balance. Sage is great because it’s one of these herbs that actually works really quickly, and the majority of women will see a difference within two to three days, if not sooner, once they actually start taking it. There’s no known side effects with it. You can take it for as long as you want to. It’s not hormonal, which means that in the peri-menopause, if you’re getting hot flushes and night sweats and you may well be on contraceptives, you can still take it. It also means that during the menopause itself, if you’re on HRT and the HRT is not quite cutting off the hot flushes or night sweats, you can take it alongside as well.

A licensed remedy for your hot flushes and night sweats

Now, we have a particular product called Menoforce®, which is actually licensed for the symptom of hot flushes and night sweats during the menopause.

And many people ask us, “How do we take this?” Because it’s quite a strong tablet, and you just take it once a day. If you’re just getting hot flushes during the day, you can take it with your breakfast. If you’re getting night sweats or evening sweats or flushes, you can take it with your evening meal. And if you get both flushes and night sweats, then we recommend you take it with your evening meal, because we know from people who’ve come back to us that it can reduce the night sweats and that will make you sleep better. And when you sleep better, your body is much more able to cope with symptoms the following day.

We also do a tincture as well. And for some women, if you’re getting hot flushes and night sweats, or you don’t really know when they’re coming or going, then taking the tincture little and often can sometimes work better than taking one particular tablet during the day. 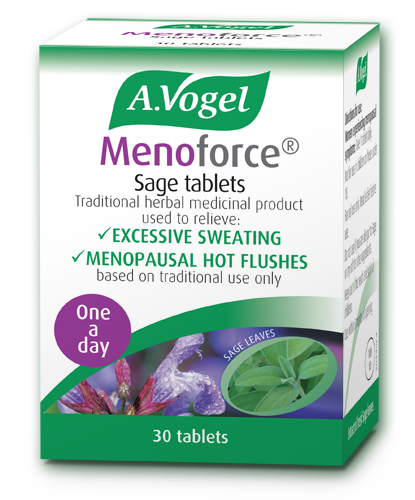 Made from extracts of freshly harvested sage herb, our Menoforce® is a licensed herbal remedy for menopausal hot flushes and night sweats, in a convenient one-a-day tablet.

Now just one little piece of advice. There’s a lot of information out there that sage cannot be taken if you have epilepsy. Now, there is an oil in sage called thujone, and it’s thought that thujone is the ingredient that can actually cause these particular problems. The levels of thujone are noticeable in the tincture, but in the tablet, because of the way we actually make the tablets, the majority of the thujone has actually dissipated. And with our particular product, because it’s licensed, the indication does not give any contraindications if you have epilepsy. So we are normally happy to recommend it in this situation.

Now, what about Agnus castus? Agnus castus has been known for, again, hundreds and hundreds and hundreds of years, and apparently, there’s a story that in the time of the ancient Greeks, when the soldiers were going off to war, they made sure that their wives were given Agnus castus in the wrong belief that it would stop them wanting to run away with other men. And unfortunately, in a lot of cases, in a lot of the stories we hear about those ancient times, it obviously didn’t work very well. In the middle ages, men actually used to take it. One of the things it does is that it can also help to lower testosterone, and it was given to monks, to actually stop them having all those naughty thoughts while they were writing in the dark.

What is Agnus castus used for and what does it do?

So when can you use Agnus castus and what does it actually do? In the peri-menopause, as you start the approach to the menopause, sometimes, the way in which your hormones fall will give you certain symptoms. And for those of you who are getting your periods closer together, they might be getting longer, there might be less of a gap between them, if you’re starting to get cramping, if you’re getting the breast tenderness and food cravings and the bloating, this is very often an indication that your progesterone levels are falling, but oestrogen is staying high.

And this is where the Agnus castus comes in, because it helps to just very gently raise your progesterone levels. Now the only thing I would say here, Agnus castus takes maybe two to three cycles to begin to start taking effect. So if you’re getting a lot of flooding, if you’re getting really serious bleeding, this will not help. And this is the case where, as I often say before, you must go to your doctor if the symptoms are really, really bad.

Containing the extract of the fruit from the Agnus castus plant, this licensed herbal remedy can be used to help relieve symptoms of PMS, menstrual cramps, breast tenderness, bloating, irritability and mood swings.

The one issue with Agnus castus, because it’s actually working on producing extra hormones, is you cannot take this with any contraceptives, and this is really only helpful while your ovaries are still working. So if your periods have stopped, then Agnus castus isn’t really going to help you during the menopause.

So I hope that’s given you a little bit of insight into these two herbs. I look forward to seeing you next week on A.Vogel Talks Menopause.

Soya for menopause – how it helps & the right type to takeHooray for sage!Supporting women through the menopauseThe story behind Fermented Soya IsoflavonesHow Sage and Agnus castus can help you